Op-Ed: On the parallel regional initiatives in the Western Balkans: Regional Forums of Populist Leaders? 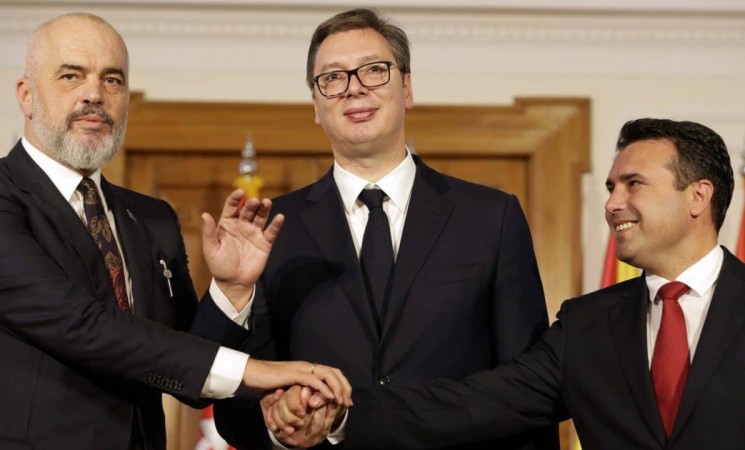 Recently, President of Serbia, Aleksandar Vučić; Prime Minister of North Macedonia ,Zoran Zaev and Prime Minster of Albania, Edi Rama have initiated a so called ‘mini-Schengen’ initiative. The second meeting of such initiative is announced to take place in Ohrid. However, the WB6 region (six countries of Western Balkans) is since years now engaged in the EU integration process. Several states are in different stages and recently, Albania and North Macedonia failed to receive a green light in opening of accession negations. Berlin Process is being currently the most active initiative promoted by some EU member states, as an obvious alternative to keep the countries engaged with EU narrative, while being on standby for the real EU integration.  On the other hand, there are several initiatives to foster regional cooperation and EU Integration, mainly taken by CSO networks (civil society organisations network). Lately, the ‘mini-Schengen’ has been introduced by the 3 leaders of only 3 out of 6 WB countries.

Nonetheless, what are the possible consequence of such developments for the regional politics? Fragmentation! Indeed, what EU has been trying to tackle and reduce by Berlin process and inter-connectivity of several sectors, can be harmed by such initiatives which include only half of the countries of the region. This initiatives creates the precedents for other WB leaders to establish a second mini mini Schengen and the list can go on, but it is for a fact that our markets are small and defective. Basically, this circles bring us to only bilateral and trilateral agreements. For that, the governments of each country have ministries in place, called Ministries of Foreign Affairs. Thus, making initiatives like this only an overlapping medialization tool.

Different from the CSO sector (which also has its flaws) the governments should admit that parallel and not interrelated initiatives in the Western Balkans, do not help at all nor its cooperation, neither its EU integration. None of the initiatives has a concrete follow up in terms of technicalities and action plans. The wording itself is ridiculous by referring to these three-party meetings as ‘high level meetings’ (see here). Indeed a house party of 3 invitees only can be high level, it could also be super men meeting, or divine-why not?

However, nothing can indeed replace the alternative of EU integration and the governments should listen to their voters. Instead of focusing on these non-sustainable initiatives, governments need to focus seriously on concrete reforms to prevent deterioration and massive migration and brain drain, at regional level. It seems like governments are reproducing the model of CSO sector where each initiative resembles to a new project, funded by some far-away donor.

Regional cooperation and EU integration need a structured approach from both the side of WB6, as well as the EU. By far, these populist show-offs only harm regional cooperation in long term, as they are not based on market studies and concrete measure, but only left at political high-level discussion. The only 'mini-Schengen' happening, put in donor-project wording, would be some sort of a 'Regional Forum of WB6 Autocrats: Exchanging best practices on authoritarian governing styles'.
Irony aside, no one ever mentions the strategic goals, outputs or even financial costs of such parallel initiatives.