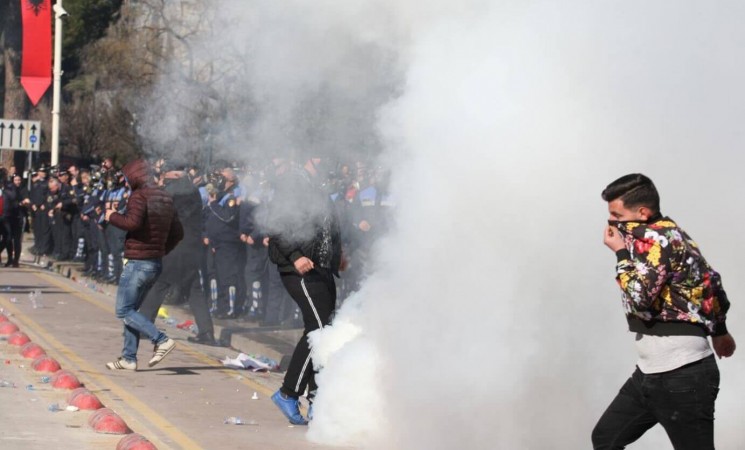 “I do not want to vote for Lulzim Basha (leader of Democratic Party), but I do not want to be ruled by Edi Rama neither. (current prime minister and leader of the ruling Socialist Party) - this phrase from a taxi driver while listening to Rama’s speech in the parliament, Thursday 21st has been the most frequent sentence I hear recently in local shops, taxis and buses.“

On 16th of February the Opposition of the country held a massive protest in front of the Prime Minister’s Office to request the resignation of Mr. Rama. Initially the protest started peacefully but few minutes after it turned out violent with few damages in the building’s main entrance.

The current prime minister is serving for his second mandate since June 2017 when the country had the latest parliamentary elections. The Socialist Party of Albania gained significant seats in the parliament, leaving thus far behind the Democratic Party and the Socialist Movement for Integration. The ruling coalition had theoretically the needed majority to make even constitutional changes. Parallelly, Albania has been trying since 1991 to enter European Union and the lack of political dialogue is the most frequent critique coming from the European Commission’s progress reports.

Last weekend (16. February), the opposition organized a massive protest in the main boulevard of the capital, which escalated into violence with protesters trying to break in the Prime Minister’s Office. The protesters were pushed away by using tear gas. The situation lasted for four hours with several attempts to enter the building from its front door. On the other hand, the Prime Minister Rama, leader of the Socialist Party as well was holding simultaneously an electoral meeting in Vlora, following the upcoming local elections which will take place on June 2019. The media representation of events was simultaneous for both rallies, showing thus an image of a split screen, which one can even read symbolically.

The Democratic Party and protesters requested the resignation of Rama with accuses of leading the country towards severe economic conditions, corruption, massive drug cultivation in the country and lack of alternatives for young people. While the protest had many supporters, the use of violence seemed to not be supported by all protesters on the boulevard of Tirana. At the end of the protest the leaders of Democratic Party and Socialist Movement for Integration announced that all MPs from the party would resign from their mandates during the next plenary session of the Albanian Parliament, Thursday 21st calling also for a second protest.

Despite the pressure of international community to condemn violence and conduct a political dialogue within the parliament, on Thursday 56 MPs of the opposition (DP and SMI) resigned from their mandates. The resignation was accompanied by a supportive protest in front of the Plenary Session building of the Parliament. Although this time with no damages and a peaceful 3-hour-long rally, the building was surrounded with a barbed-wired fence and the Electronic and Postal Communication (AKEP) issued a decision which blocked mobile networks and electronic communication in certain areas of the city. Such decision created several reactions in social media by NGOs and citizens, comparing the situation with flashbacks from dictatorship.

Based on the electoral code, the new MPs of the opposition shall be replaced by the next candidates in the parties’ lists from June 2017 [1], however the situation is not clear whether the potential proposed names will follow the boycott as well. On the other hand, earlier this December, Prime Minister Rama appointed new ministers and reformed its cabinet following the largest student protests in the history of Albanian Post-Communist Democracy. Such decision faced controversies regarding some of the new ministers.

The opposition proclaims its commitment to continue protesting until resignation of Rama and the main communication exchange between leaders is done through media and ironic statuses and accuses on social networks. The political situation in Albania leaves its citizens with no real political alternatives for towards problems that the country is facing. With no representation from the opposition, a strong and newly reformed government and a hesitant European Union the Albanian voter seems to have no real choice, bringing thus a general apathy, discontent and increasing emigration.

[1] The 140 deputies of the National Assembly are elected for a four-year term through a system of proportional representation from the closed lists in 12 electoral districts that coincide with the Administrative units.