Many Belarusians are dissatisfied with 26 years of Lukashenka’s regime 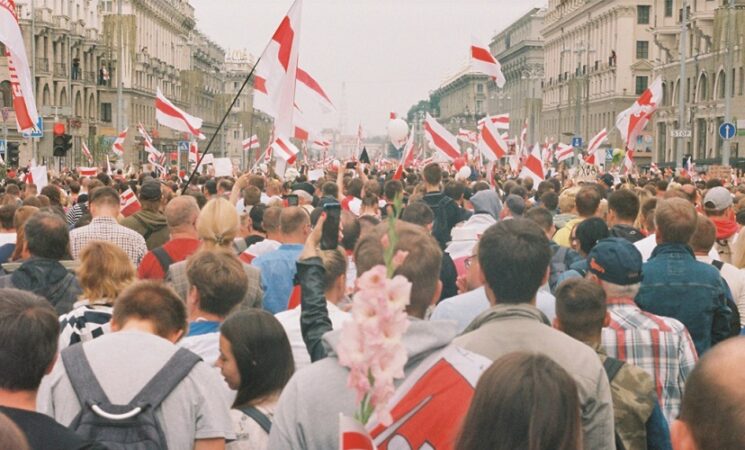 For several months now, media is overflowed by pictures of mass protests of demonstrators in Belarus. Apparently, many people continue to go on the streets and stand for changes in the country.

What causes such a reaction? First, many Belarusians are dissatisfied with 26 years of Lukashenka’s regime, which worsened the socio-economic situation in the country. Second, people condemn authoritarian politics and constant abuse of their rights. This could be observed now, with mass arrests and illegal actions against protest leaders, media representatives, public activists, and just citizens, who protest on a demonstration or even pass by. The last straw here is extreme electoral fraud and a banal unwillingness of the government to listen to peoples’ wishes of change. Thus, the demonstrations in Belarus are still continuing and this since the end of May 2020. They have already caused strong reactions both inside and outside the country.

As for internal changes, we can observe the consolidation of the Belarusian society, which did not exist before. Most of the meetings are spontaneous - they are organized without a leader, and social networks like Telegram play the main role here. However, the idea of change unites everyone. Even employees of state-owned enterprises, which make up a large part of the country's economy, began to protest.  Moreover, human rights defenders, independent media, and individual inspirers began to play a huge role.

The protests in Belarus also provoked a reaction from the international community. For example, many countries raised concerns that these elections have been held far from fair and democratic standards. On September 9, the Parliamentary Assembly of the Council of Europe stated non-recognition of the election results. It is now initiating the establishment of an international investigative body for offenses in Belarus. The UN also discusses the situation in Belarus. On September 18, the UN Human Rights Council adopted a resolution in which it called for an end to human rights violations and a dialogue with the opposition.

The EU also supports Belarus. Many EU member states, as well as the European Council, did not recognize the results of the elections in Belarus. The European Parliament has shown exceptional support for the situation in the country. For example, on September 17, it recognized the Opposition Coordination Council as a representative of the people of Belarus. Also, on September 21, the EP held a meeting with a leader of the opposition, Svetlana Tikhanovskaya. At this event, the support was expressed for the opposition and the demonstrators in Belarus. The parties also agreed on the EU aid package "after democratic changes" in Belarus will be held.

However, protests and violence in Belarus do not stop. Lukashenka is not going to give up the presidency, and countries like Russia are ready to support him in this. For example, on September 23, Lukashenka illegally held his inauguration, which was supposed to take place in October. Obviously, the ceremony was kept secret, and the press was not allowed. Therefore, it is extremely important to support all kind of solidarity with the people of Belarus, and spread information about the situation in the country.

Previous article The Moldovan government has launched a criminal investigation Next article COVID-19: Czech Republic in the second wave