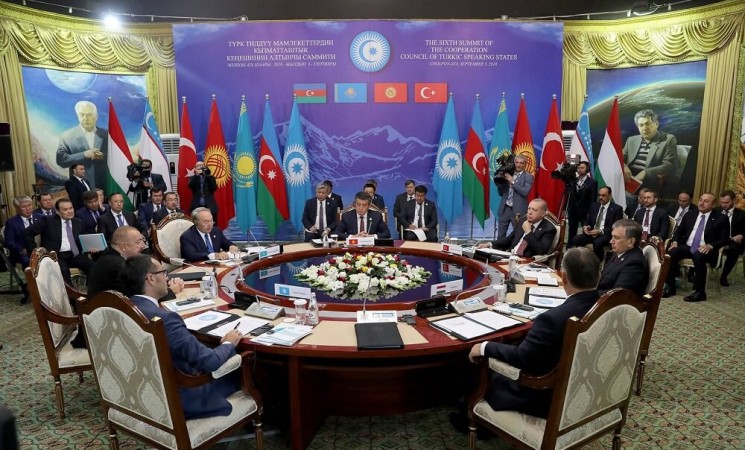 In recent years, there have been significant changes in both domestic and foreign policy of Hungary. While Hungary and EU relations deteriorate, Hungary improves its relations with the Eastern countries including China, Russia, Turkey in the context of Hungary’s “Eastern Opening.” According to Eastern Opening, Hungary attempts to develop relations with the Turkic countries. In this respect, as a guest of honour, this year Hungary joined the 6th Summit of the Cooperation Council of Turkic-speaking States (briefly named Turkic Summit). This summit is held each year under the umbrella of the Turkic Council which is an intergovernmental organization consisting of four founding member Turkic states Turkey, Azerbaijan, Kyrgyzstan and Kazakhstan.[1]

This council aims to develop cooperation among Turkic states. For the first time as guests of honour Hungary and Uzbekistan joined the summit this year. It is being expected that Uzbekistan will be also a member of this council next year. At the summit, Viktor Orbán of Hungary Prime Minister highlighted the historical and ethnic ties of Hungary with the Turkic world. He stated, “Hungarian is a unique and strange language, which is related to the Turkic languages. We have always closely followed the cooperation between countries of Turkic identity. Among you, we are the people who have moved farthest West, and who also converted to Christianity. So we are a Christian people living in the West, standing on foundations of Hun-Turkic origins; the Hungarians see themselves as the late descendants of Attila.” He also underlined that “We are living in a new world order, and its history is fundamentally determined by the development of the rising states in the East.” [2]

In recent years, non-Western political ideas have come to the fore on some right Hungarian political parties. In this sense, the ideology of Turanism has been supported by the Hungarian far-right Jobbik Party which criticizes liberalism, globalism and embraces “Eastern Turn” policy.[3] According to Hungarian Turanism, Hungarians originate from the Ural-Altic race and have Hun-Turkic origins. Turanism ideology aims to unite politically and culturally all Turkic peoples across the world. Moreover, Turanism thought has a historical and theoretical background in Hungary. In the early 20th century, Pan-Turanism firstly came to the fore on Hungarian intellectuals especially turcologists. Hungarian turcologists and ideologists took a very significant role in shaping Pan-Turanism ideology in the first half of the 20th century. Furthermore, Pan-Turanist associations were established both in Hungary and Turkey in the beginning of the 20th century. In subsequent years, this political thought lost its effect in Hungary under the communist rule and era.

Generally, in recent years, Hungary's attention to the Turkic world has risen. In this regard, Kurultaj (Turan Kurultaj), which is a traditional and cultural event of Central Asian nomadic and Turkic peoples, is biyearly held in Hungary. Kurultaj is also supported by the Hungarian Government. The Hungarian Government has also recently paid more attention to the Turkic world and countries in order to increase its influence over the East in the context of Eastern Opening. In this sense, the Turkic World Opening, based on both cultural and economic ties of Hungary with the Turkic world is a significant part of the Eastern Opening of Hungary.

[1] The official webpage of Turkic Council, (http://www.turkkon.org/en-US/HomePage) [2] “Prime Minister Viktor Orbán’s speech at the 6th Summit of the Cooperation Council of Turkic-speaking States”, The Official webpage of Hungarian Prime Ministry (http://www.miniszterelnok.hu/prime-minister-viktor-orbans-speech-at-the-6th-summit-of-the-cooperation-council-of-turkic-speaking-states/) [3] Michal Kowalczyk, “Hungarian Turanism. From the Birth of the Ideology to Modernity – an Outline of the Problem”, Historia i Polityka, No. 20 (27)/2017, pp. 49 – 63 ISSN 1899-5160, e-ISSN 2391-7652
Previous article Why is a land swap a bad idea? Next article Working towards sustainability: Macedonian educational system and SDG 4