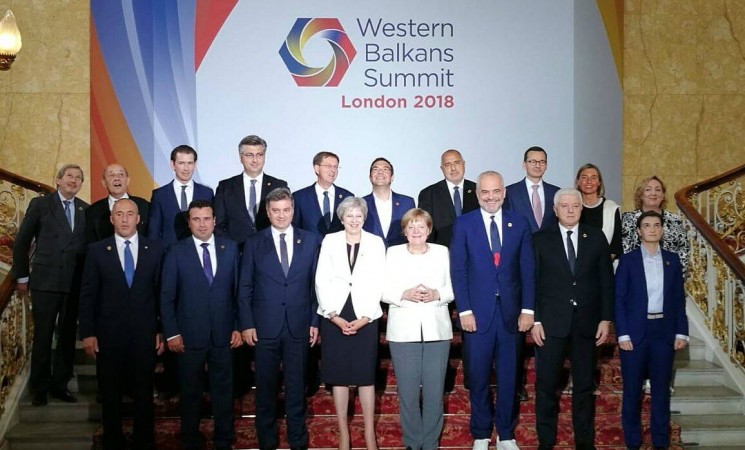 During the London Summit on the Western Balkans, that took place on July 10, 2018, the EU once again showed its commitment to broaden the cooperation with the Western Balkan region. For that reason, EU provides concrete measures, concentrating on: economy, security and reconciliation, as three focal elements of cooperation. Heads of Government, Foreign Ministers and Ministers of Interior from the Western Balkans (WB) together with the like-minded representatives of the EU member states and high-level EU representatives met in London in order to forward the process of EU integration of the Western Balkan countries in the European Union (European Commission release, 2018). Especially remarkable, but expected and repetitive was the rhetoric of the High Representative/Vice-President Federica Mogherini, stating that following the positive results, after the regional goodwill, preparedness and capability to resolve the bilateral issues in the field of politics, security and economy, and due to continious work in the region, the Western Balkans are moving closer to the EU. She also signified that the WB are prepared more than ever before to become a part of the common European future in the big EU family (Mogherini, 2018).

At the London Summit, it was concluded to be established greater progress on three crucial areas: Increasing economic stability, Strengthening security cooperation, and Facilitating political cooperation. In the area of socioeconomic development, they agreed to concentrate on continious implementation of the action plan to establish a Regional Economic Area as it was decided in Trieste Summit in 2017, in order to foster many new investments in the region, and to create new job places. By joint efforts, it is expected to be achieved digital skills, after the decisions for the launch of Digital Agenda for the Western Balkans, at the Sofia Summit in Sofia, Bulgaria. Furthermore, it should be considered the ways to step up financing for Small and Medium Enterprises (SME) and start-ups, including through the mobilization of non-banking financing. Regarding the second particular point, the countries in the region with EU help should continue fighting against processes of corruption, organized crime, terrorism, firearms and cyberattacks. The leaders of the regions also devote to enforce agencies on information sharing. In the field of Facilitating political cooperation, regional cooperation, good neighbourly relations, and permanent reconciliation are important. During the summit, the leaders also exchanged their views about some fragile issues, such as war crimes and missing persons, but also about the importance of the young professionals in the process of regional connectivity (alluding to the regional projects, such as RYCO, SALTO, etc.) (European Western Balkans, 2018).

In spite of these general achievements and future objectives, the critics claim that this event was finalized even worse than the pessimist predicted, stating that the Summit was only a photo-opportunity for the domestic and the EU elites. The first negative aspect on that was the host of the event. Undeniably, the UK was the country that even before the Brexit was predicted to host the Western Balkans Summit, but a myriad of points stand behind the reason why UK was not the best possible host for this years Western Balkans Summit. Initially, two years ago, the UK citizens on a Referendum expressed their opinion that they no longer want to be a part of the EU. Simply, it was unusual Britain, a country which is leaving the EU to hold a meeting aimed at helping countries join the European Union (The Economist, 2018). In this regard, the Macedonian Minister of Forreign Affairs , Nikola Dimitrov added that those inside forget how cold it is outside (Dimitrov, 2018).

The UK, nor politically, nor economically is particularly concerned and connected with the Western Balkan countries. An exception of this is Bosnia and Herzegovina with the launch of the Anglo-German initiative. The British-German initiative was provided to ask Bosnian politicians to give a written commitment to see through a package of as yet undefined reforms, but which are closely linked to the Compact for Growth and Jobs that was published earlier, the letter said, referring to an earlier strategy led by the EU (Balkan Insight, 2014). Moreover, the Western Balkans Diaspora in the UK is not very big. And most importantly, taking into consideration that the citizens of the Western Balkans have to obtain a visa before entering the UK, for Western Balkans officials was not very easy to attend the event (Merdzanovic, 2018). Subsequently, at the day of the Summit, as critics argue, the Foreign Secretary Boris Johnson resigned on the day he was supposed to greet the Foreign Ministers of the WB 6 countries. Alan Duncan, the Minister responsible for Europe, stepped in, while Theresa May found herself in a situation in which she had to secure her position as Prime Minister by addressing parliament and holding extra meetings with her party and her cabinet. The row of the events only demonstrated that the six Western Balkan countries are not a priority for the UK government, especially not at a time when the government itself seems unstable. Dimitar Bechev, recognized and remarkable professor in the field, on his social media profiles satirically said that Balkan leaders coming to London tomorrow to lecture the UK on political stability (Bechev, 2018)

In the end, the London Summit achieved many results and there were signed three declarations of particular importance: Joint Declaration on Regional and Good Neighbourly Relations, a Joint Declaration on Missing Persons, and a Joint Declaration on War Crimes. An individual UK contribution for the region was the doubling funding to the region from the Conflict, Security and Stability Fund, as well as a doubling of UK staff in the region dealing with security issues affecting the UK. The UK committed £10 million for digital education among young people; this is a program run through the British Council from which 4,500 schools will benefit. On the other hand, a thing that was missing and was failed to be accomplished at the London summit was the signing of a declaration on the establishment of RECOM, the Regional Commission for the Establishment of Facts on War Crimes and Other Serious Violations of Human Rights in the Territory of the Former Yugoslavia. Only the UK foreign minister was drawing up papers for the signing of the declaration, while the other countries’ governments have not discussed the issue at all (Milekic, 2018). Jovana Marovic from Balkan Investigative Reporting Networks (BIRN) stated that London Summit failed initially because the expectation surrounding it were low from the very beginning, the economic talks were reduced to youth unemployment, enterpreneurship, and digitalization (Marovic, 2018). Evidently, as Florian Bieber states, an Austria-based analyst of south-eastern Europe; It is time to ditch the Berlin Process (The Economist, 2018).