While some are paying homage to him and referring to him as a hero, claiming that his fatal act was tempted by The Hague Tribunal, others are protesting that it should not be forgotten that he was a man convicted of war crimes. Fertile soil for conflicts between the opposing opinions is surely social media platforms and portals which are representing various political currents.

Citizens who sympathize with Praljak’s death have been lighting candles in front of the poster with his photograph since the day of his suicide. „Altar“, as one of the Croatian politician refer to the tribute place, is positioned on the main square of Croatian capital, Ban Jelačić Square. Together with the lights of Christmas market, the funeral candles continue to illuminate his figure under Jelačić’s monument. 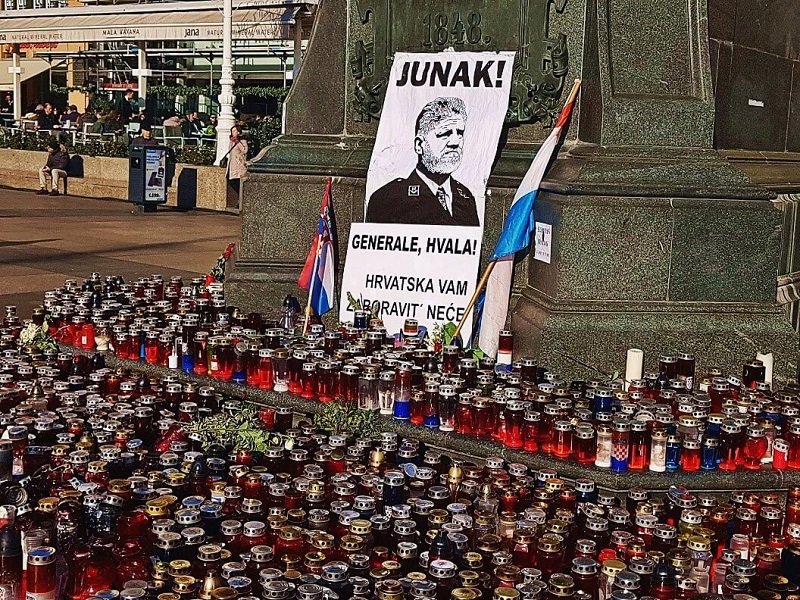 However, the other side of the public which accepts verdict handed down by The Hague Tribunal is also actively expressing their attitude addressing Slobodan Praljak as Nazi by connecting his suicide to the death of the military and political leader, Herman Göring, who was well known as a close confidant of Hitler. Also, at one point, Praljak’s photography at the tribute place on the Jelačić’s square was ripped. However, that act was soon followed by placing a new placard with his photography. 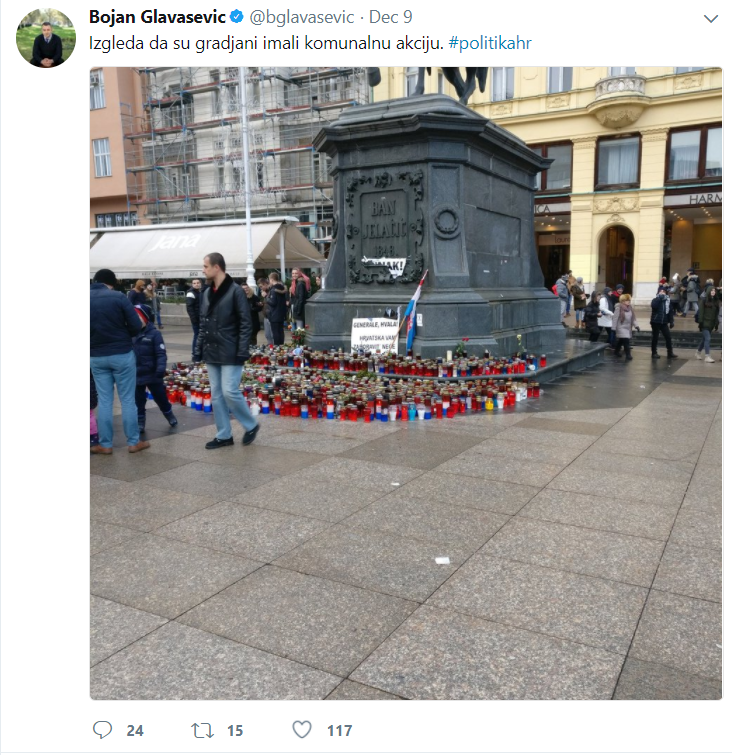 Source: Bojan Glavašević, a representative in the Croatian Parliament, published the photo of Praljak’s ripped poster on his twitter with following sentence: „Seems that citizens had communal action.“

Regardless of community support or contempt, a few days ago Praljak has been buried In the circle of family and closest friends at Zagreb’s cemetery Mirogoj. After the autopsy in The Hague, the body was transported to Zagreb under special measures. Dutch authorities and the U.N. court are still investigating how Praljak got hold of the apparent poison while in custody.

Few days after the private funeral, on 11th of December, the commemoration was held in the main concert hall in Zagreb. Several thousand people, numerous friends, retired generals and politicians, including two government ministers, minister of Defence Damir Krstičević and Deputy HDZ President Milijan Brkić, gathered to honor deceased general. The commemoration ended with a performance of the Croatian national anthem. His family was not present, and neither was Croatian president Ms. Kolinda Grabar Kitarović nor the Prime Minister of Croatia, Andrej Plenković. The main organizer of the commemoration, former Croatia’s minister of Defence, Pavao Miljavac, stated that everyone was invited and that there were no reserved seats for politicians. 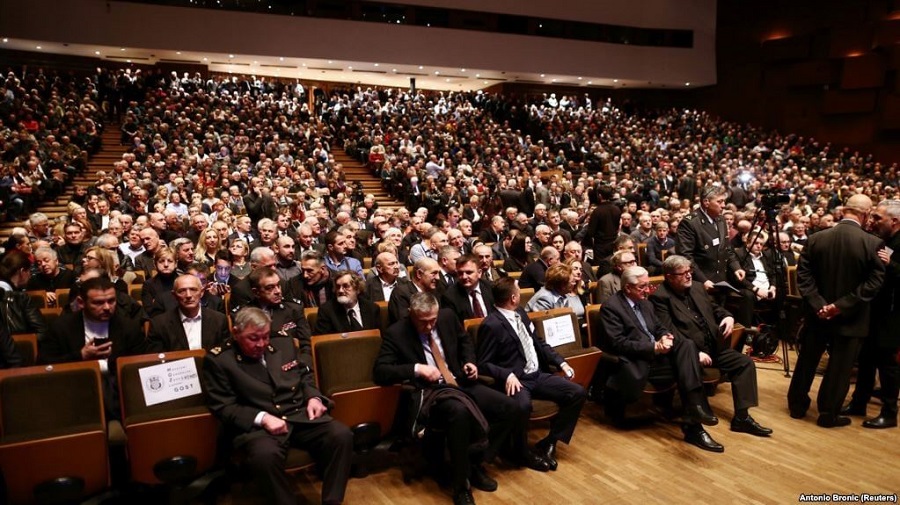 Emerging situation on the political scene of Croatia connected with Praljak’s death and court verdict encouraged students from all parts of Croatia to organize a large gathering of solidarity and submit the demands of Croatian students and youth to the authorities of the Republic of Croatia. The requirements apply to Croatian’s policy towards Croatian community in Bosnia and Herzegovina and their citizen’s rights within the state. Students have strongly voiced that gathering will be a peaceful one without creating uncertainty or conflict. Requests with signatures will be submitted to the Croatian Parliament, but also to the Government of Croatia, State’s Attorney Office of the Republic of Croatia and the Presidents of the Republic of Croatia. The gathering is also under public criticisms, especially by a young population who claims that constant returning to the past have never, and will never direct Croatia to the better path.

About the Author: M. Špoljarić

Enthusiastic and determined student whose objective is to build a career in politics. A current political science student at the University of Zagreb has many international conferences, projects and programs behind her. Martina's biggest passion is security politics and security cooperation. She sees political internship at FOMOSO as an opportunity to gain more knowledge and practice, and an excellent way to report news from her region to Europeans. Martina is confident that any goal can be achieved when people work together and therefore enjoys working on youth projects.