The EU in Western Balkans: Cases of Albania and North Macedonia

Home Essays The EU in Western Balkans: Cases of Albania and North Macedonia 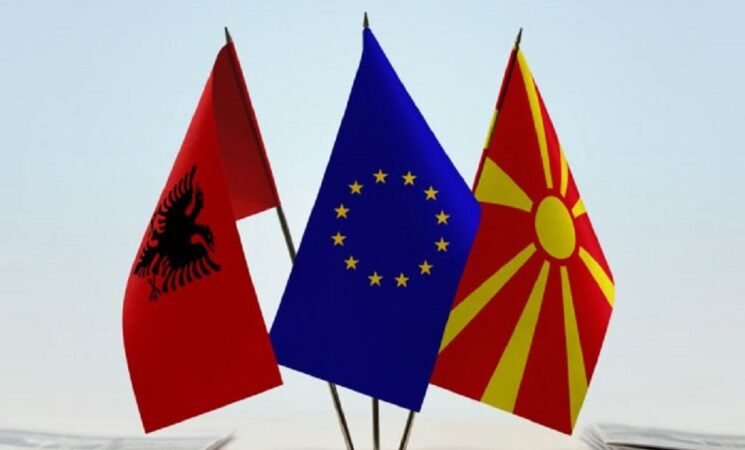 In the aftermath of Brexit, European Union was left with 27 member states with the latest enlargement taking place in 2013. After the accession of Republic of Croatia, position of their eastern neighbours was a subject of extensive discussions, expecting some of them to join in Balkan enlargement round. However, seven years have passed and no states from Southeastern Europe have become members of the European Union. Despite the notable progress of Albania and North Macedonia, advancement towards membership in the European Union proved to be more challenging than originally expected.

North Macedonia took the prospect of becoming the next EU member seriously and has made numerous significant alterations in the conduct of their national politics. The most notable is the Prespa Agreement which marked historic settlement with Greece regarding the ongoing name dispute. In early 2019, Greek parliament has approved of the name North Macedonia, after rejecting its name “Macedonia” for almost three decades due to the Greek province carrying the same name (1). Additionally, citing the fact that North Macedonia is a multi-ethnic state with ethnic Albanians being the largest minority making up nearly a quarter of total population, Albanian language was accepted as second official national language (2). Although former President Gjorge Ivanov protested the bill calling it unconstitutional, it still gained sufficient support and officially became a law (3). These concessions and adaptations clearly show North Macedonia’s strong commitment and inclination towards meeting the membership criteria. It is evident that North Macedonia has made significant socio-political progress and has proved to have ability and capacity to become a full member of the European Union.

Albania has also been praised for instituting reforms, especially regarding their electoral and justice systems. Moreover, notable progress in field of combating crime did not go unnoticed, especially since their path to EU was previously obstructed by widespread corruption and weak law enforcement (4). Although Albania was awarded with opening of the accession talks, it has still been classified as “moderately prepared” (5), meaning that further strengthening of institutions and additional adjustments are required.

However, it is important to note that the extension of membership is a rather complex procedure. Throughout history, European Union was required to adapt both its internal and external policies in order to accommodate challenges posed by the enlargement. The methodology and strategy have changed several times in an attempt to tackle critical issues and assist both the European Union and the acceding state in transition process. So-called enlargement fatigue became more prominent after the accession of Bulgaria and Romania and their struggle to integrate. This negatively reflected on the Balkan round, making the accession process rather demanding. Apart from meeting the requirements outlined by Copenhagen criteria, there must be a unilateral decision made by European Union members for a candidate state to officially accede. The EU is quite divided on this issue, with countries exhibiting both anti- and pro-enlargement narratives. Surveys show that France, Germany, and the Netherlands are just some of EU countries which do not wish to see Western Balkans joining in next ten years (6). French president, Emmanuel Macron, has long been adamant that the accession process needs to undergo notable reforms and lists this requirement as justification for halting the accession process for two Balkan states in question. This decision was faced with criticism, especially from Johannes Hahn, former EU Enlargement Commissioner, who argued that “to refuse acknowledgement of proven progress will have negative consequences, including the risk of destabilisation of the Western Balkans, with full impact on the EU”. He has openly criticised the leaders of the European Union for their politics towards Western Balkans and potential loss of credibility in the region (7). Numerous representatives of EU member states have stressed the importance of opening the accessions talks, citing both states’ hard work towards meeting the membership requirements and willingness to reform.

North Macedonia was convinced that resolving the pressing issue with Greece will allow them to finally join the European Union, as this ongoing dispute obstructed their EU path in past several years. Their EU bid ended up being vetoed and there were worries that with unclear and poor predictions, North Macedonia will lose its momentum. However, after the development of new enlargement methodology, both Albania and North Macedonia were approved to begin their accession talks which marked the historical breakthrough after the two Balkan states were granted candidate status six and fifteen years ago, respectively. Unfortunately, North Macedonia’s struggle continued. Relationship with neighbouring Bulgaria has been strained as this state asserts that North Macedonian national identity was engineered during Tito’s reign. It follows that Macedonian language and ethnicity, as well as historical figures, is actually of Bulgarian origin (8). In an attempt to resolve the historical conflict, two countries have signed a treaty with an aim of improving interstate relations, and Bulgaria - as member state of the European Union - promised to aid their neighbour on the European path (9). However, the agreement proved to have no real value as Bulgaria attempts to challenge North Macedonia’s membership despite EU officials being optimistic about beginning accession talks by the end of this year.

In the past few years, right-wing parties have been on a rise and Euroscepticism is increasing even among European Union member states. With unstable internal relations, diminishing support, and EU not fulfilling their promises regarding enlargement, there is no stable factor that will reassure leaders of Western Balkan states that their vision of joining is achievable. EU integrations are a joint effort and the European Union, as an intergovernmental institution, is required to clearly convey willingness to cooperate. It can be observed that these efforts are oscillating and the integration process is often unpredictable. However, considering revised enlargement methodology, numerous EU leaders supporting the extension of membership, as well as geopolitical interest of non-EU actors in the Balkans, European Union aims to re-establish itself as credible and reliable player in the region.

Previous article Is there a future for the Balkans and the European Union? Next article The Question of Reproductive Rights in Poland