No one will stop Belarusian women

Home Commentaries No one will stop Belarusian women 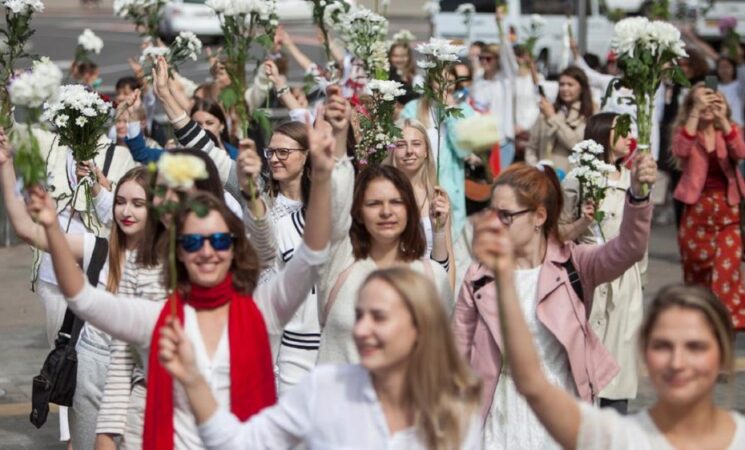 Protests in Belarus do not stop. Since August 9th, every Sunday citizens have been on the streets protesting against the election result which confirmed Aljaksandr Lukashenka leader of the country.

Lukashenka has ruled Belarus for more than 26 years, since the first elections after the independence from the Soviet Union, but there has been no lack of protest in those years.

This year, the demonstrations started before the elections and intensified at the end of May, when Olga Kovalkova, Mìkola Statkevìč e Sjarhej Cichanoŭskij organized a protest at the Komarovskij market in Minsk in the presence of a thousand people.  Cichanoŭskij, known for calling Lukashenka a "cockroach," was arrested by national authorities shortly thereafter on charges of being a foreign intelligence agent[1]. Viktor Babaryko, banker and Lukashenka’s opponent, was also taken into custody. Following this event, people urged and persuaded Svetlana Tikhanovskaya, Cichanoŭskij's wife, to become the official independent candidate in the 2020 elections.

What is now called EVAlution[2] began on 16th July, when all Belarusians saw, for the very first time, the image of three women united against Lukashenka’s regime. Maria Kolesnikova, a musician and art manager and Babaryko’s campaign manager, and Veronica Tsepkalo, wife of disqualified candidate Valery Tsapkala, who had to leave the country because of threats to him personally and to their children, appeared together in a photo with Svetlana Tikhanovskaya to show to the world their intention to win the election[3].

This female team created a brilliant and creative election campaign: using social media in order to organize meetings and strengthen solidarity between citizens and, above all, inform people about the electoral frauds.

Despite the enormous popular mobilization to support them, on 14th August, the Central Electoral Commission declared the winner the current President with 80,23% of the vote, while Tikhanovskaya received 9,9%[4].

The publication of the results has led to allegations of vote-rigging and made protests even more meaningful. The numbers and the scale of the protests increased, as did the women involved. They organized peaceful marches, dressed in white, holding flowers in their hands (known as “The Women’s March of Belarus”[5]) which the government reacted with detentions and threats[6].

Indeed, Lukashenka's response to these protests was not long in coming, hundreds of people were arrested, many women are now being detained "for violation of the law on mass events" [3], along with others, were forced to flee.

Tikhanovskaya and Tsepkalo left the country due to fear of reprisals against themselves and their families. Maria Kalesnikova, who had refused to leave Belarus, was arrested on 7 September near the Ukraine border and is now being detained in Minsk, charged with incitement to undermine national security[7].

But they are not the only ones to be persecuted: all members of the Coordination Council[8], created by Svetlana Tikhanovskaya to ensure a peaceful resolution of the crisis in Belarus, were arrested or forced into exile. The latest was Svetlana Alexievich, journalist and Nobel Prize winner, who left Belarus for Germany, promising to come back according to future political conditions. Antonina Konovalova, Tikhanovskaya's collaborator, has gone missing and no information has been given about her, while Olga Kovalkova has managed to flee and take refuge in Warsaw.

Still, the protests never stopped. They have continued, headed by other brave women. Among them, the most famous is Nina Bahinskaja, the “great-grandmother facing the riot control agents”. She is 73 and since 1988 she has protested for the liberty of the arrested political opponents. Opposition leader Tikhanovskaya continues to support them on every social media[9].

And some recognition has also begun coming from the European institutions: the European Parliament awarded with Sakharov Prize for Freedom of Thought Belarus' opposition movement, recognizing it as an "initiative of brave women"[10].

In addition, Svetlana Tsikhanouskaya, Maria Kolesnikova, and Veronika Tsepkalo have been nominated for 2021 Nobel Peace Prize "for their struggle for fair elections and for inspiring peaceful opposition against the illegitimate regime in Belarus"[11].

Tsikhanouskaya assured that “Belarusians are ready to fight until victory” [12] and to overthrow “the last dictator of Europe”[13].

Previous article Demoralizing the nation: How are the Belarusian authorities trying to retain power by putting pressure on the people? Next article Is there a future for the Balkans and the European Union?