Revival of Belarusian diasporas after the 2020 elections

Home Essays Revival of Belarusian diasporas after the 2020 elections 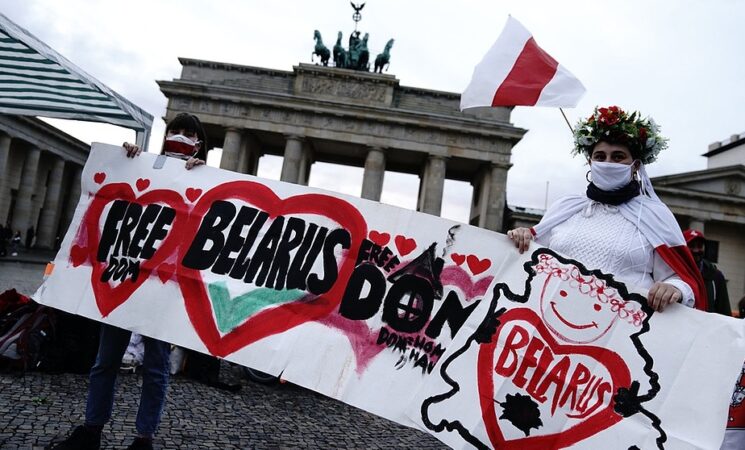 For a long time Belarusian diasporas have not been active, usually joining the diasporas of peoples that belong to the territory of post-Soviet countries. However, the events of August 2020 changed everything colossally. Now Belarusians, even abroad, try to support each other, help financially, and especially strongly experience a sense of community and unity.

This process began on election day. People stood in line for 5-7 hours to vote at the Belarusian Embassy in Moscow, a similar situation was in St. Petersburg and in other cities of the world [1].

A few days after the elections, representatives of the Belarusian diaspora even pitched a tent camp and went on a hunger strike near the EU Delegation in Warsaw in order to induce the European Union to take action against the official Minsk as soon as possible [2].

Later on, Poland began issuing free humanitarian visas for Belarusians who have suffered from the actions of the Lukashenka regime. Subsequently, the Belarusian diaspora turned to the Polish government with a petition, in which it asked for permission to work for citizens of Belarus with such a visa, as well as those awaiting refugee status [3].

Belarusian activists in the German capital have designated the caravan the alternative "embassy" of the "free and democratic republic of Belarus." Over the past two months, they have organized more than 40 events to show their solidarity with protesters in their home country [4].

Moreover, the first World Belarus Congress took place on October 31, 2020. This was a historical meeting of Belarusians from all over the world. The Congress was held in the format of an online video conference, consisting of speeches and moderated discussions with the participation of experts [5].

The press secretary of the Belarusian Sports Solidarity Fund Yevgeny Medvedev said that this forum was organized jointly by people from Australia, Canada, USA, Germany, Sweden and nearly 40 other countries [6].

In November, the Belarusians of Italy offered the Vatican to organize a meeting between Svetlana Tikhanovskaya and Pope Francis. In a letter addressed to the Vatican Secretary of State Cardinal Pietro Parolin, the Association of Belarusians of Italy expresses its “bewilderment and indignation at the fact that Apostolic Nuncio Ante Jozic handed over his credentials to the Belarusian dictator Alexander Lukashenko." The letter also draws attention to the situation with the illegal ban on entry to Belarus of the Catholic Metropolitan Tadeusz Kondrusiewicz [7].

In solidarity with the striking Belarusians, the Belarusian diaspora created the initiative “You strike – We work” . The Belarusian government often illegally fires people who strike, and many more Belarusians will be able to join the strike if they have confidence their families will not be left without food or money [8].

On December 10, 2020, the opening ceremony of the People's Embassies of Belarus took place.

The People's Embassy is an initiative of the community of Belarusian diasporas “Belarusians Abroad” with the support of the National Anti-Crisis Management to create representative offices of democratic Belarus abroad in the face of the loss of legitimacy of the current regime in the country. The opening ceremony was attended by Svetlana Tikhanovskaya and representatives of the Presidium of the Coordination Council for the Transfer of Power [9].

Also, thanks to the Belarusian diasporas, the first Belarusian online school was opened in Ukraine. When creating the school, the requests of parents and children were taken into account: it is convenient to study from anywhere in the world, the school issues a certificate of the state sample of Ukraine, the Ukrainian program is taught in Russian, in-depth study of the English language and IT are provided [10].

The Belarusians sent an appeal to the International Criminal Court in The Hague with a request to initiate a criminal case against the incumbent President of Belarus Alexander Lukashenko for “crimes against humanity”. The step was made at the suggestion of the Belarusian Canadian alliance and the initiative of the Belarusians of Toronto "Vasilki".

“We call on the International Criminal Court and prosecutor Fatou Bensouda to initiate a criminal case against the former president of Belarus for crimes against humanity,” the portal quotes the text of the appeal [11].

Thus, it can be noted that the Belarusians abroad have begun to actively support their compatriots on the territory of Belarus and have made countless attempts to help them in one way or another. It is really very inspiring and well worth seeing.