What is the Hungarian “enabling act”, why is it controversial and what is the EU’s response?

Home Background Knowledge What is the Hungarian “enabling act”, why is it controversial and what is the EU’s response? 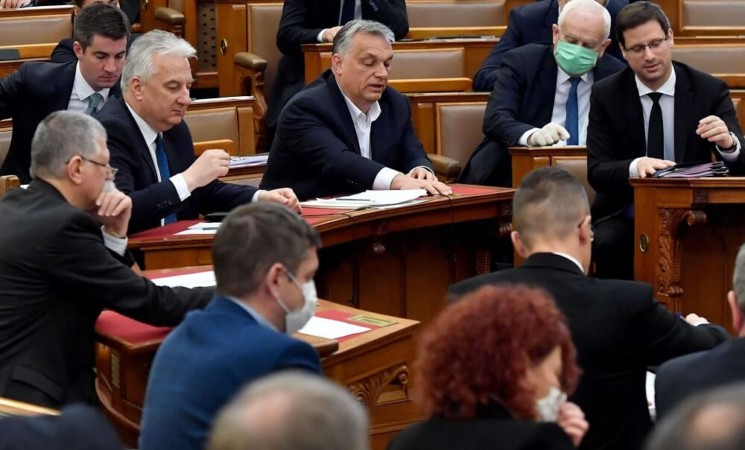 Around two months ago, Hungarian Parliament has passed a law allowing the government to rule by decree for an indefinite time period. It was implemented as one of the measures to deal with the COVID-19 pandemic in Hungary. However, the law became controversial as it does not have a time limit and the government can rule by decree without any relevant constitutional constraints.

The Act on the Protection Against the Coronavirus, or the “enabling act”, followed the declaration of the “state in danger” by the Hungarian Parliament. As stated at the beginning of the law itself, the main purpose of the bill is to allow the government to respond quickly to the situation developing around the health emergency. It allows the government to rule by decree, thus: “… suspend the enforcement of certain laws, depart from statutory regulations and implement additional extraordinary measures by decree.”[1] Furthermore, it introduces new criminal law provisions for issuing any statement that communicates broadly defined “misinformation” regarding the governmental response to the pandemic or the pandemic itself. The possible offender may face 5 years in prison.

The opposition tried to push for a sunset clause to be incorporated in the bill, but they were unsuccessful. They also raised concerns in regards to the amount of power given to the government without any constitutional restraints. Prime minister Victor Orbán disregarded these concerns by emphasizing the necessity to have such a wide authority due to the uncertainty connected to the epidemic.

However, the members of the Opposition were not the only ones concerned about the Act on the Protection Against the Coronavirus. The law sparked an outcry from Human Rights organisations such as the Human Rights Watch and Amnesty International as they feared further restriction of human rights in Hungary. In the letter to the European Council, they have expressed their fear that the newly acquired powers by the government would further weaken the rule of law in Hungary, especially in terms of human rights and pluralism. The letter urged members of the European Union to address Hungarian government and give them concrete recommendations to be implemented in order to safeguard the rule of law and human rights in the country.

The response of the European Union was not a direct one at first. The president of the European Commission issued a statement, which did not name Hungary but called for all emergency measures to be proportionate and limited to what is necessary. Later on, the European Parliament passed a resolution which denoted the “enabling act” conflicting with European values. In May, some members of European Parliament even asked for a launch of Article 7 against Hungary, which would suspend some of its rights as the EU member state. The Commission disagreed with such measures and rather opted for monitoring the situation as stated by the Commission’s vice-president.

Recently, the Hungarian justice minister announced that the government plans to terminate the “state of danger” on the 20th of June 2020, which would also end the rule by decree. However, it does not mean that it would end the validity of the 100 decrees already issued. Therefore, it is possible that the EU monitoring will continue in the following months.

Previous article lockdown could lead to a much-needed education reform in Slovakia Next article Interview: The inspring journey of a young leader