Gorizia and Nova Gorica have a long shared history or, in other words, they used to be just one town. Gorizia/Gorica used to be the historical capital of the Goriška region in Western Slovenia.  Until 1918, the town was under rule of the Austrian Empire and mainly populated by a majority of Italian-speaking people alongside Slovenes, Germans, and Jews. After the First World War and the dissolution of the Austro-Hungarian Empire, the city fell under the Italian sovereignty and jurisdiction. [1]

In 1945, after being liberated from Nazi-Fascism by the Jugoslav army at the end of the Second World War, Gorizia became the object of contention between Italy and Tito’s Yugoslavia. Eventually, a compromise was found in 1947 when the Treaty of Paris established that Gorizia would return to  the Italian rule while the surrounding region would be yielded to Yugoslavia. Consequently, people who used to live and work together and meet in the same bars, shops, and on the street had to cross an international border to meet each other. The frontier cut one of Gorizia’s principal squares in halves and was not only marked by the so-called “Wall of Gorizia”[2] but also a red star on the roof of Nova Gorica’s train station. As a matter of fact, the wall did not only represent the border between Italy and Yugoslavia, but also the end of the Western Bloc.[3] 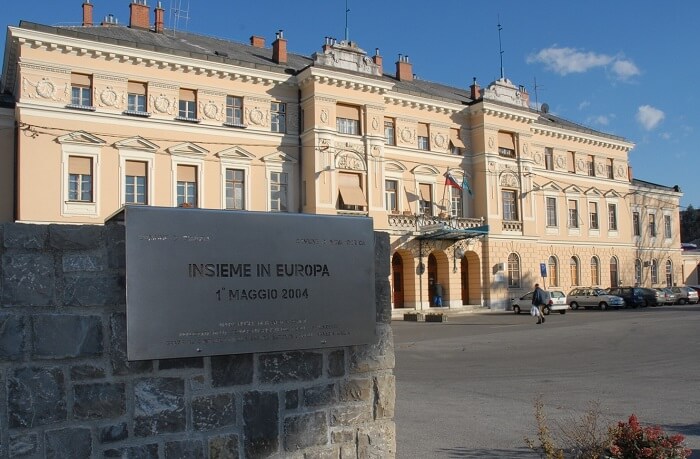 Simultaneously, the Goriška region was deprived of its historical capital and the crucial services and infrastructure it used to supply to the area. To solve the issue, Tito decided to launch the construction of a new town to be named “Nova Gorica”. The new settlement underwent a rapid demographic and urbanistic development and became the symbol of the new Italo-Slovenian border. Since Slovenia’s accession into the EU Schengen Area, effective on 21st December 2007, the two towns once divided by the Iron Curtain have finally been re-united in practice.[4] The square narking the border was renamed “Europe Square” and an inscription carved on the ground reminds us of its historical role. 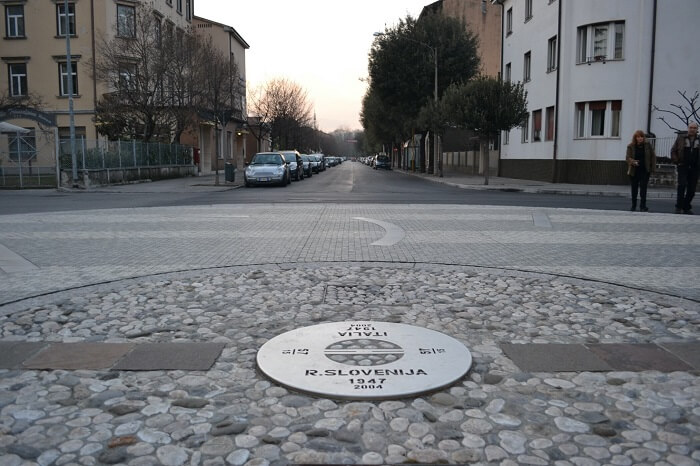 The peculiar history of the two cities is reflected by their architecture too. In Gorizia, the medieval castle, the narrow little streets of the city centre and the 19th century villas testify to the ancient and variegated history of the region. Instead, Nova Gorica – about five minutes by foot from the centre of Gorizia – displays concrete residential blocs typical of socialist utilitarian architecture.

At times, a certain hostility between the two towns re-emerges. For instance, the Italian side was subjected to stronger restrictions than the Slovenian one during the Covid-19 pandemic. This situation provoked rising complaints claiming that Slovenian businesses took advantage of the situation to enjoy wider customer affluence.

Despite this outlying episode, the two towns not only have a common history but also share similar problems and challenges. For example, both Gorizia and Nova Gorica are little provincial towns with few job opportunities that experience a massive brain drain in favour of bigger urban centres. The project involving them as 2025 Capitals of Culture aims at addressing these issues by fostering their multicultural environment and increasing multilingualism. Similarly, it revolves around the organization of an increasing number of events to stress the importance of European values and cross-border cooperation. These initiatives are expected to increase tourism, revitalize degraded border areas, attract new residents, improve transport connecting rural areas with the city centre, and increase the amount of cultural associations and NGO’s active in the region.

The main thematic framework of the 2025 European Capital of Culture will be cross-border cooperation. Not by chance, the Bidbook was entitled Go Borderless!. To strengthen this aspect, several cultural and recreational events will be realized along the border area.

The keywords of the venue will be “Europe”, “Share” and “Green”:

In conclusion, the choice to award Nova Gorica and Gorizia the status of European Capitals of Culture is certainly a relevant and meaningful choice for Europe. The two towns provide the example of their local experience to illustrate the potential of the European integration process for peaceful coexistence.