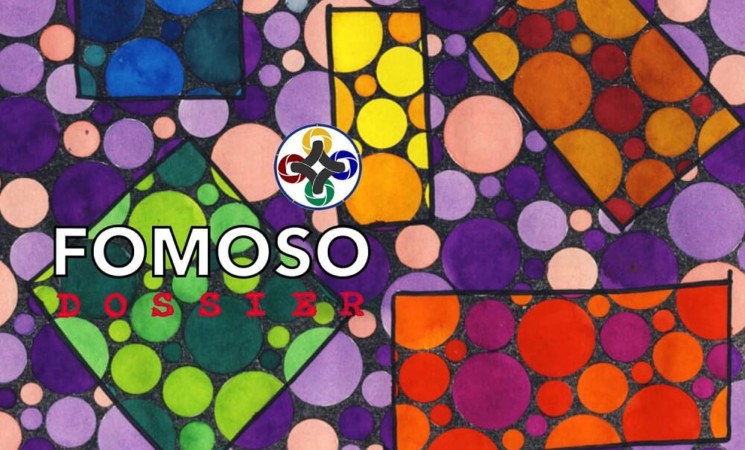 The European Union’s economic and social cohesion policy (ESC) is responsible for “harmonious and sustainable development of economic activities, a high level of employment and protection and improvement of the environment in the territory of the EU.” [1] Since this policy is a serious European agenda, the European Union puts in more than one third of its common budget on it. Core targets are organized in seven-year cycles with mandatory programming documents.

The Ministry of Regional Development of the Czechia is the main institution which administrates the information about EU Funds in the CR, mainly the National Coordination Authority (NCA) which performs the coordinating of attraction from EU Funds. [3]

It is important to point out which system of regional subdivision is used by the European Union ESC. Three leveled NUTS (Nomenclature des unités territoriales statistiques - Nomenclature of Territorial Units for Statistics) systems are applied and Czechia is divided into these three levels according to population. [4] 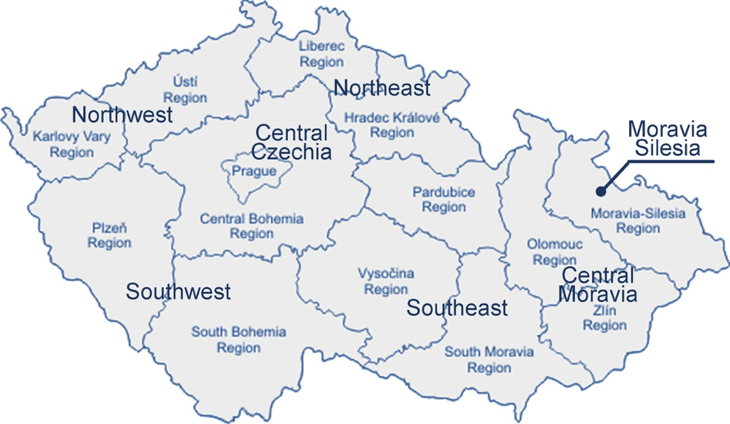 In this article we will not choose Prague as the region, since it doesn’t represent the criteria for receiving funding and has quite flashy economic growth and low unemployment. [6]

We will analyze Central Moravia Cohesion Region to show the contributed financial aid from ESIF, during the programming period of 2007-2013. To start, this region is situated in the eastern part of Czechia and includes two NUTS II regions – Olomouc and Zlin. This region has an area of 9231 km2 and borders with Poland and Slovakia. In Central Moravia Region has 11.5 % of the national population. [7] 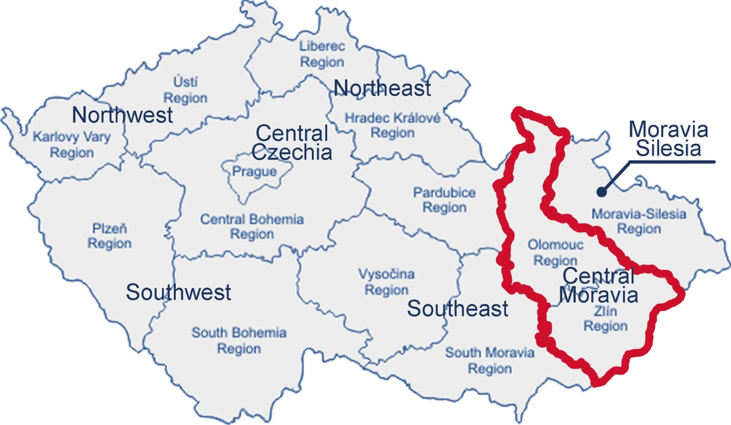 Weaknesses and strengths of the region

According to the European Commission Regional Innovation Monitor Plus Olomouc region has a drastic difference between its southern part, where an economic center is, and northern part which is marked as “economically weakest regions of Czechia due to its unfavourable location and transport availability”. [8] The main strengths are fertile land with developed agricultural production, machinery and equipment industries, and industrial optics and optical devices.

The main weakness of Zlin region is its peripheral location, it is far from Prague and lies outside the transport route Ostrava-Brno. Its strength is the economic potential – wood and iron processing industries and electronics and textiles. Furthermore, there is a growth in number of research units. Thus, human resources in science and technology are developing. [9]

Despite these facts, the Central Moravia region is considered as the underdeveloped region of Czechia. GDP is 9.4% of the total national and considered to be the third lowest in a country. However, the unemployment rate is similar to the national average of 2.2%. As stated by the European Commission Regional Innovation Monitor Plus the only problem with unemployment are “high rates of structural unemployment and the high share of long-term unemployed.” [10]

During the programming period of 2007-2013 the Central Moravia Council was responsible for implementation of the EU-funded projects, which was dissolved in 2017.

The chosen region does not have enough sources to launch and perform innovation policies without support from the national level, which is mainly funded by the ESIF and national funds. [11]

Taking into account the fact that EU funds are the main instrument of carrying out economic and social cohesion policy, the Structural and Investment Funds include:

Other Funds include Solidarity Fund and European Globalisation Adjustment Fund. [12]

The operational Programme “Central Moravia” co-founded by the European Regional Development Fund was established by the European Commission in Czechia on 3 December 2007 as a regional operational programme for the period 2007-2013. The investment from the ERDF estimated EUR 657 million. [13]

The project includes transport infrastructure, urban growth poles and social and health care infrastructure. The aim was to support sustainable development economically and socially, to reduce unemployment, construction of new roads and renovation, make the region more welcoming with places for accommodation and work. [14]

As shown in Table 2, there were four priorities. The first one is transport. The main point was to provide inhabitants with better and modernized public transport, build safe transport infrastructure, particularly link it to national and the transport network.

The second is integrated development and regeneration of the region. It implied development and improvement of accommodations (regional centers, towns and villages) and accessible social services and more supportive business environment. Tourism is the the third priority, rising the awareness of tourism in this region, by improving its attractiveness. The forth one, technical assistance, means provision of support in administration, monitoring and control. [15]

On of the contributed project is named “Reviatlization of Cunfluence Vřesůvka and Malý Potůček”. The investment of this project was EUR 68 746, where the EU ERDF contributed EUR 65 309. This contribution was made as terms of “Czech Republic - Environment” Operational Programme during the programming period of 2007-2013. The project implementation period was 08/2014-04/2015. [16]

The objective was to change the wasteland of Vřesůvka and Malý Potůček rivers to a wetland. The project itself, which meant to be rather small project, is a flood control system, which prevents some of the consequences of climate change. Nowadays the wasteland is a  wetland with grasses and trees. Additional to the flood control system the officials created a new recreational area for local citizens, where they have bike and walking path, can do sport and make picnics. [17]

The project helped to “restore the natural characteristics of the water course, prevent erosion and improved soil quality”. [18] By improving the quality of the river water with gravel-lined flow-through pools, they created groundwater reservoirs which prevented local household wells from drying out. Moreover, this area became a home for the wildlife: birds, beavers, frogs and fish.