The Russian invasion: what are the consequences and outcomes?

On February 24, 2022 the President of the Russian Federation Vladimir Putin made an emergency appeal to the Russian citizens. In the appeal he announced the decision to conduct “a special military operation” in Donbass at the “request” for military assistance from self-proclaimed Donetsk and Luhansk people’s republics (DNR/LNR) in Ukraine. Mr Putin placed the responsibility for “possible bloodshed” on “the conscience of the Ukrainian regime.” The day before he received permission from the Russian parliament to use Russia’s armed forces outside the country. As a result, on February 24, 2022 the Russian troops attacked the borders of and military facilities in Ukraine. The Ukrainian government introduced the martial law. Mr Putin called the invasion a “forced measure” and stated that the Western states did not provide Russia with any security guarantees. Despite Russia’s assurances that civilians would not be harmed, soon after the invasion residential districts and civilian facilities in Kyiv, Kharkiv, Mariupol, Mykolayiv, Odesa, Kherson, and many other cities were attacked leading to numerous casualties. 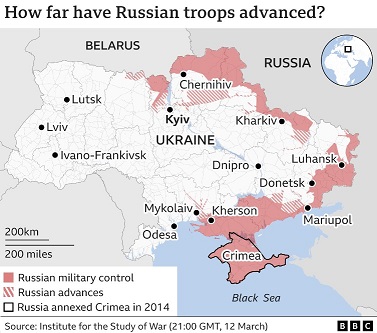 As of March 13, thousands of people have become victims of hostilities. According to the UN refugee agency (UNHCR), 2.5 million Ukrainians were forced to leave Ukraine.

Four rounds of negotiations between Ukrainian and Russian delegations from February 28 to March 10 had no success. Ukrainian presidential advisor Mykhailo Podolyak commented the negotiations held on February 28 in Gomel, Belarus: “Negotiations are difficult … the Russian side is still extremely biased in its destructive processes.”

The Russian invasion has no doubt set in motion irreversible political processes in Ukraine and Europe. The entire world is now asking a question, – “What is next?”. The Western countries have provided financial, military and humanitarian support to the Ukrainian Armed Forces, civilians and refugees, and imposed sanctions on the Russian officials and oligarchs, banks and businesses as well as transport. Some states (e.g., the Czech Republic, Latvia) stopped issuing visas to Russian citizens apart from humanitarian cases. The support of the West, and especially of the European Union allowed Ukraine to submit the application for Ukraine’s membership in the EU. Furthermore, the Russian invasion established a new Iron Curtain. BBC Diplomatic correspondent James Landale outlined 5 possible scenarios of the Ukrainian-Russian war: short war, long war, European war, diplomatic solution and Putin ousted. Under the first scenario, Russia uses its full military potential and captures Kyiv in which it then puts pro-Russian government. This outcome would depend on the Russian military, financial and human capabilities. And even if Russia assigns its government in Kyiv, the regime would be extremely unstable and the likelihood of the Ukrainian national resistance would be very high. Long war scenario presupposes that the Western states would continue providing Ukraine with military equipment and finances. Ukraine would not surrender its territories and continue fighting. Russia would be lacking resources and external support from other states.

Therefore, it would finally have to withdraw its troops from Ukraine, suffering heavy casualties. I agree with Mr. Landale that this is the most likely scenario to happen, however, the Russia’s withdrawal of troops would be only a temporary action to win more time to enhance its military capabilities. European war would happen if Russia decides to invade non-NATO (Moldova, Georgia) or threaten NATO (Baltic countries, Poland) states. Nevertheless, this scenario might not come to a play as the response from the West would be immediate; the Russian crisis would get worse and within the country it may turn into more severe resistance to the current regime, which would eventually lead to its collapse. Diplomatic solution also seems to be unlikely as to achieve compromise Ukraine would have to acknowledge the Russian sovereign rule in Crimea and parts of Donbass (Eastern Ukraine). At the same time, Russia would have to accept the Ukrainian pro-Western direction. Neither Ukraine nor Russia would agree on that. The last possible outcome of the Ukrainian-Russian war is the replacement of Mr. Putin as a result of an antigovernment coup. In this case new leader might be more willing to accept terms made by Ukraine and the West. Currently, many people in Russia based on the information they receive from their government still support their President, therefore, such scenario seems to be unlikely for the nearest future. However, in the long-term perspective it is not impossible.

About the Author: D. Lvovska

My name is Daria Lvovska. I am getting Bachelor degree in the International Relations at the Anglo-American University, the Czech Republic. I was born and grew up in Ukraine. Prior to FOMOSO I completed internship at the organization PNND (Parliamentarians for Nuclear Non-proliferation and Disarmament). My main interests in the field of international relations are history, politics, security and law of the EU and Eastern European states. My dream is to work in a security organization (OSCE or NATO) and master German and French languages.