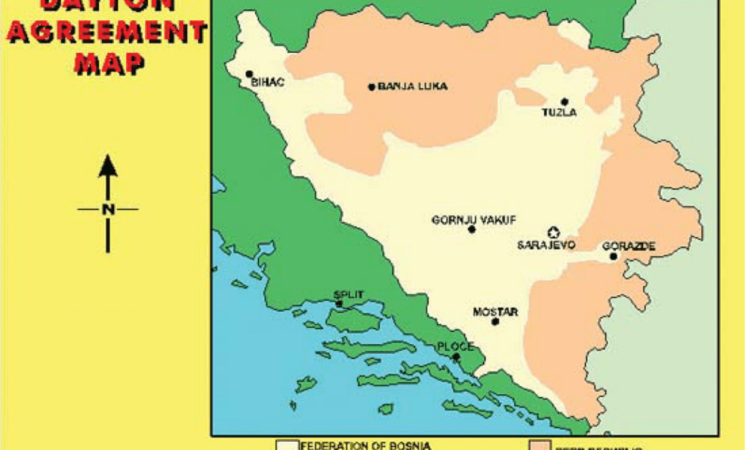 This year marks the 25th anniversary of the signing of Dayton accords that officially ended the bloodiest conflict on the European soil after the Second World War. Agreements were to turn Bosnia-Herzegovina into a poster child for international post-war reconstruction, a model for all other state-building enterprises. Yet only a brief inspection of the situation in Bosnia-Herzegovina today reveals that Dayton agreements have not written a story of success but rather a cautionary tale of how not to approach reconstruction after an especially violent conflict.

Dayton agreements created a state structure that can be best described as ‘Frankenstein monster’, a deserving name for what might be the most complex and rigid political system in the world. The population of 3 million is governed by three presidents, more than 150 ministers and a vast number of members of parliament, and divided between two entities, 10 cantons and one independent district. Beside institutionalizing ethnic divisions that were the main cause for war, Dayton accords have also cemented external international supervision, turning Bosnia-Herzegovina into a protectorate with a number of officials so high that responsibility and accountability, building stones of every democracy, are easily eluded.

To be fair to the brokers of the Dayton agreements, there was little time and not many options in 1995. With genocide in Srebrenica, war has entered a new, horrific stage of violence, and the international community was under great pressure to act. Gathered in Dayton, Ohio, three warring parties were all but coerced to accept the accords that were to become a foundation of the future Bosnian state. Despite the lack of shared vision on how the latter should look like, international community envisioned, rather naively one might add, that Dayton system will somehow create an environment ripe for reforms and measures, and ultimately lead to a functional, multi-ethnic democracy.

In the end, nobody got what they wanted. Dayton created a country in a perpetual state of political crisis, a creature paralyzed by deadlocks so frequent that they seem to be a part and parcel of everyday life. Growing youth unemployment, corruption, and general lack of perspective are causing a mass exodus from the country. Nationalistic tensions are on the rise, denial of war crimes has infiltrated mainstream discourse, and war heroes are still praised as heroes. Institutionalized ethnic apartheid, lack of political will and weak civil society have not allowed for reconciliation and healing process to come to pass; instead, toxic political atmosphere, malaise and mistrust hang over the country like a dark sky about to unleash a storm.

A perfect storm, at that. In the absence of the international community that is responsible for upholding the Dayton regime, despots have mushroomed across the region, exploiting ethno-nationalistic rhetoric for their continuous contestation of the Dayton system and the Bosnian sovereignty. Adding to an already bad situation of Bosnian citizens, the coronavirus pandemic will inevitably worsen the economic situation, strain the public-health system and challenge already vulnerable democracy.

Bosnia-Herzegovina is in dire need of constitutional reform. Bosnian politicians, all benefiting from the structural impasse, are neither able nor willing to seriously negotiate the future of their country. If there was a political party capable of transcending the ethnic divisions and harvesting large support from all three communities, the much-needed reforms would be in reach. However, such an entity does not exist and neither does a progressive electorate, willing to vote for leaders of the whole country instead of divisive, self-serving nationalists. The post-Dayton system did not allow for the development of a robust civil society, one capable of producing strong, cross-ethnic national movement. The international community insisted, again and again, on cooperating with the same political elite that was involved in the war, leaving out ordinary citizens and civil society. How is a country to part with its past when it remains governed by the same war-faces?

The best way forward for Bosnia-Hezegovina remains the one toward the EU. This is not so obvious for Bosnian citizens anymore, however. Over the last decade, the EU has lost a lot of its credibility and legitimacy in the region. The financial crisis and preoccupation with internal riffles have led this organization to reduce its presence and visibility in the region, giving steam to ethno-nationalists who are continuously pushing forward the narrative that EU has all but abandoned the Balkans. The collapse of EU’s Western Balkans policy in 2019 and its slow response at the outset of the pandemic further tarnished the trust in the EU, and coronavirus was used to promote anti-EU narrative.

As it is with every crisis, this one hides opportunities as well. EU could (and should) reassert its position and legitimacy in the region by sending a very clear signal that Balkans are indeed part of the EU family. After a shaky start, the EU reiterated its commitment to the region by pledging €3,3 billion to help battle the coronavirus pandemic. This will not be enough, though; not only should EU’s policy remain consistent this time around, but it is crucial to build on this momentum and move even further. Firstly, by improving its channels of communication, so as to have more control over how European project and assistance are being communicated in the region. Moreover, the EU should harden its stance toward authoritarian leaders, foster independent media and make space for other social actors to enter the political dialogue. As a soft power, the EU is in the best position to further the process of democratization and the rule of law by providing financial assistance in return for reforms. Economic growth is the best weapon against narratives and voices from the past that continue to hinder the Bosnian progress.

Ultimately, any real change can only come from inside. Even if the door to the EU opens, Bosnians must show willingness to join. The first sign of a nation waking up to its power were mass-demonstrations in 2014 when protesters were seen waving all three flags side by side, united in a simple demand for a better life, more jobs and end of corruption. In the end, the Bosnian spring was unable to bloom, but it was an indicator that Bosnian people can unite for the common cause. If they are to change the malady that has befallen their country, political and social actors will have to decide what future they want to create and take responsibility for it.

Previous article Revisiting the idea of Mini-Schengen: gamesmanship or true breakthrough? Next article Demoralizing the nation: How are the Belarusian authorities trying to retain power by putting pressure on the people?

Jasmina Eminić is an intern at Forum für Mittelost- und Südosteuropa. Her areas of interest include EU migration policy, EU integration, EU's relations with Western Balkans, the Middle East, and identity politics. Jasmina Eminić holds a BA in International Relations from University of Ljubljana, Slovenia, and is currently pursuing a second BA in History and Culture of Middle East at Free University Berlin. During her first studies, she spent one semester abroad at Berlin School of Economics and Law. She also completed internships in Slovenian government institutions as well as volunteered in the non-governmental sector, complimenting her knowledge with practical skills in event organization, public relations, project coordination and journalism. Jasmina Eminić speaks Slovenian, Bosnian, English and German, and is currently learning Arabic and Hebrew.