Bosnia and Herzegovina after the General Elections 2018

Home Commentaries Bosnia and Herzegovina after the General Elections 2018 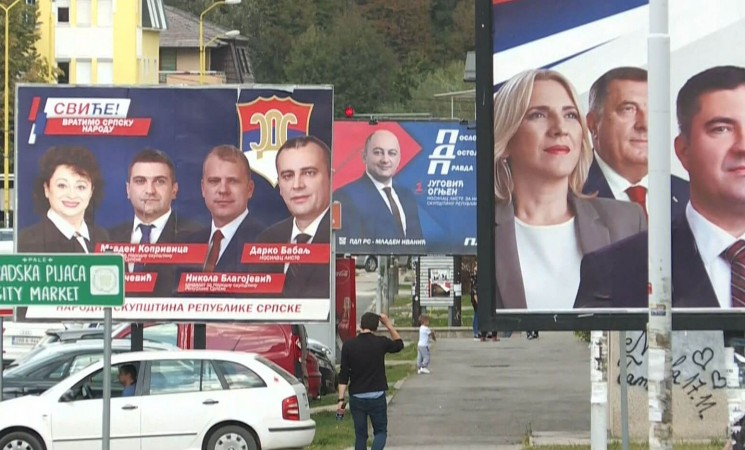 On October 7, 2018, in Bosnia and Herzegovina (BiH) were held the general elections. Voters elected the national Presidency and House of Representatives, the Presidents and legislatures of the two entities, and the legislatures of the ten cantons of the Federation of Bosnia and Herzegovina. 53.26 % of the population in BiH expressed their opinion and gave their vote. With the 90.42% of the votes scrutinized the first two parties in the Federation are Stranka demokratske akcije (SDA / 36.89%) for the Bosniak (Bosnian Muslims) members of the Presidency and for the Croatian ones the leading party Demokratska Fronta BH (DF BH / 52.83%). Whereas in Republika Srpska, the party Savez nezavisnih socijaldemokrata (SNSD) won with 53.79% of the votes.

The election results did not bring major changes on the political scene in BiH in comparison with the results of the previous elections and the political situation in the country during the previous four years of governing. The national media examined the process of elections as a choice among nationalism, corruption and nepotism. Before the Election Day, the political opponents were involved in a fierce political campaign. According to Neven Andjelic, professor at Regent University in London, and a visiting professor at University of Bologna, the general elections in BiH were a step towards Ankara, Brussels or Moscow. Apparently, the population of BiH did not vote in accordance with the promises and predicted projects, presented in the political programs of the political parties. In spite, the population generally gave their vote in accordance with the ethnic or religious lines.

Indeed, during the years, the religion has deeply penetrated into the daily politics of Bosnia and Herzegovina. Quite predictably, the Bosnian Muslims gave their vote to SDA and Šefik Džaferović, Bosnian Serbs in Republika Srpska to Milorak Dodik and SNSD. The only unexpected (up to some extend) result was the win of Demokratska Fronta and Željko Komšić. According to the public opinion in BiH, Komšić and Demokratska Fronta won the elections thanks to the Bosnian Muslim votes, and not to the Bosnian Croats, which traditionally gave their vote to Dragan Čović and HDZ. Nevertheless, this was not completely surprising moment, taking into account that the same candidate won under similar surrounding on two mandate periods with SDP. However, in spite of Čović who predominantly cares about the rights and the progress of the Croatian entity in BiH, Komšić stated that he will act in purpose of every citizen in the Federation of BiH. In his statement, he claims that he is a Bosnian Croat, but he has one homeland - Bosnia and Herzegovina. Komšić is also pro-European and pro- NATO oriented.

On the other hand, in Republika Srpska, Milorak Dodik once again won the votes among the Bosnian Serbs. Expressing his close ties to Serbia and Russia, and being unconditionally against NATO membership of BiH. In the speech after his win on the election night he added that he will try to eliminate the Western influence in the country and that he is not interested about the winners of the other entities and that he cares only about the Serbian entity.

Now, disputable facts about the final results of the elections emerge:

Why are the Bosnian Muslims that predominantly gave their vote to SDA completely dissatisfied with the final outcome, claiming that they will continue living in a state capture as before? Why didn’t they give their vote to other political options, and to some young profiles on the political scene, such as Denis Bećirović (SDP), or Boriša Falatar (Naša stranka)? Bećirović could have been a positive and new spirit in the Bosnian politics. He was the only candidate that did not wage any negative campaign during the whole process. In opposite, on his public appearances, he only spoke about the positive things that he and SDP may bring if the citizens give their vote to him and this party. In addition, he continuously referred that he will unconditionally fight against the worst enemies in the state, such as: the poverty, the unemployment, the inequalities, injustice, and corruption.

At the end, it cannot be excluded the fact that Bećirović and SDP lost their elections because of three connected facts. First in the political scene of BiH, SDP is perceived as residue of the Communist party during former Yugoslavia. Secondly, SDP has already won and were the major political party in BiH, but after many affairs, reforms and programs, lost the political power. At the end of the day, every reformer is pre-determined to pay the price of his/her action, up to the extend not only to lose elections, but also to be obstructed of gaining an opportunity to be a part of the political power in the next decade, and to have a chance to be the major harbinger of much better and more prosperous future. Thirdly, a part of population did not give their vote to SDP because this party, left-oriented, is not connected with particular religious ties. It could not be excluded the fact that some of the potential SDP’s votes were transmitted to Željko Komšić. Also, SDP is complaining about electoral frauds, invalid ballots with the vote to Denis Bećirović.

Eventually, whether the old-new political tripartite establishment will deliver the necessary reforms and will bring the country much closer to the EU gates, remains an open question and a scenario to be seen in the next years. Apparently, although the citizens of BiH use their democratic right to vote, they are prone voting for autocratic and nationalistic oriented leaders.