Where will Macedonia go? Left, Right or Straight to NATO? - Part two 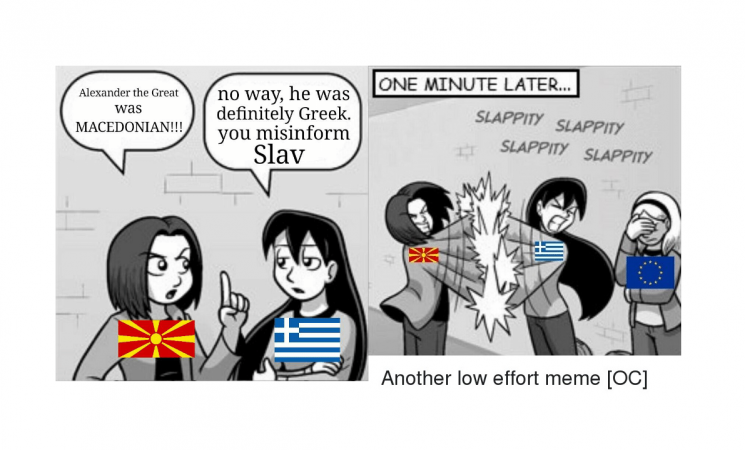 Tuesday morning. Nothing new. Just some protest about a name. In Skopje and Athens. About the name of the country where everyone climes property. Macedonia. Μακεδόνια. Call it the way you want it. It’s fine. I’m fine with that.

In a time when the Macedonian and Greek Government are trying to negotiate (I don’t really agree with this term, but yet it is diplomacy that dictates the path), in the capital of Macedonia- Skopje and the capital of Greece- Athens were organized protest against the name change. HA. Both sides don’t want to change the name. So, then, why we don’t keep it and agree with it?

There is a whole story behind the art called negotiations, and the name is “THE ORANGE QUAREL” or beyond win-win. It goes like this: Let’s imagine that we have two children (in this case Macedonia and Greece) and they have a fight or dispute over one orange (the name).

Here, the scenarios as followed: both children wanted the orange for themselves and ignored the interest of the other child. So we have 1 – lose/lose situation – no one gets the orange, and we spend 20 more years fighting over, losing the opportunity for bigger regional cooperation, spreading nationalistic feeling and rising not-necessary tensions.

Situation 2 – win/lose – where one child grabs the orange and overpowers the other one, and that child goes to his/hers mum and cries about how unfair the behavior of the other child was, goes to international courts, and even worse, in the name of the protest calls its busiest airport “Orange” spiced up with few ‘warriors on horses’ and fountains that carry the same name.

Fortunately, a clever mediator (Matthew Nimetz) came along with a good idea, where one child can cut and the other one can choose. This would be a good solution, we would have win-win situation, and both sides would get equal parts from the orange. But, it turns out that, as we know how children are - never satisfied, they both got angry again.

The children were using the one dimensional negotiation; both children wanted the orange for themselves. And the problem was if one of them gets more the other one will lose. So, we should approach to the orange differently, the child doesn’t get 100% of the orange, but it's 100% satisfied from what it gets (multidimensional satisfaction). Now, it’s not necessarily that one side will win and the other will lose. Instead of getting the fairness solution, which was half of the orange for each child, the mediator asked the children what they want. It turns out that one child was not interested in eating the orange, but in the orange peel because it wanted to bake a cake with the peels of exactly one orange, while the other one wanted to eat the orange, but always was throwing the peels in the trash can. So here, the mediator peeled the orange and gave to every child what they wanted. Here we have the efficiency objective. Both children were 100% satisfied from the mediator.

Ah children…it’s never that easy, especially if they are both stubborn and hold on something like “nationalism” that doesn’t exist in EU dictionary, at least it doesn’t on paper. So, after the naming of the solution, both mums went to the principal office and complained. They also complained to the whole building, to other neighbors (Turkey, Serbia, Bulgaria), even they gather together on the squares (in Skopje and Athens) to express their dissatisfaction. That’s not how you do diplomacy.

You don’t play with the child’s future, just to get political points. Both protests were triggered by the oppositions in the countries. What I could see on the media, as well in Macedonia as in Greece, that people who were stopped and asked on the street had the same opinion: We don’t want to change the name. So, I say again, don’t change it. Accept it. Take the peeled orange and eat it.

Just when we think, ah, maybe, maybe both children can be satisfied with the solution, a third child shows up, and wants the peel for itself (Bulgaria). Maybe, now the mediator will think to go on the market and buy another fruit…or two more oranges. So everyone gets what she or he wants: Macedonia doesn’t change the name (stubborn as always), Greece can call Macedonia under it UN name (FYROM or just Macedonia, which won’t happen- stubborn as always) and the third child can sit quietly in the corner (since Bulgaria recognized Macedonia by it constitutional name).

If I was asked, I would rather take the peel and bake the cake, so the other children can see what a good chef I am, that although young I can bear with great challenges as baking and diplomacy making. After all, a cake can buy me a long term ticket for the game called EU and NATO. In the end of the day, I am not really interested in eating the orange (Macedonia never had territorial pretensions toward Greece). And we both can drink some orange juice together – use the name Macedonia.

Since we are not allergic on oranges...

Previous article The Return of Religion in Public Sphere: The role of Islam in contemporary societies – A Bosnian Perspective Next article Men Don’t Cry” and the evolution of Bosnian War movies

Nadica Angjelkoska holds a Bachelor's Degree in Security and Financial Control from the University in Ohrid, Macedonia. She upgraded her studies in Bremen, Germany, studding EU affairs. She is not an active member in any political party, but she considers herself as a liberal. Her biggest interests are EU Diplomacy and Politics and its impact on the Balkan region. She has been active in various NGOs, mainly for the youth integration in society and youth issues. Now she is focusing on her other topic of interest, which is terrorism and radicalism in Macedonia.