The Western Balkan media reactions about the Greek-Macedonian agreement 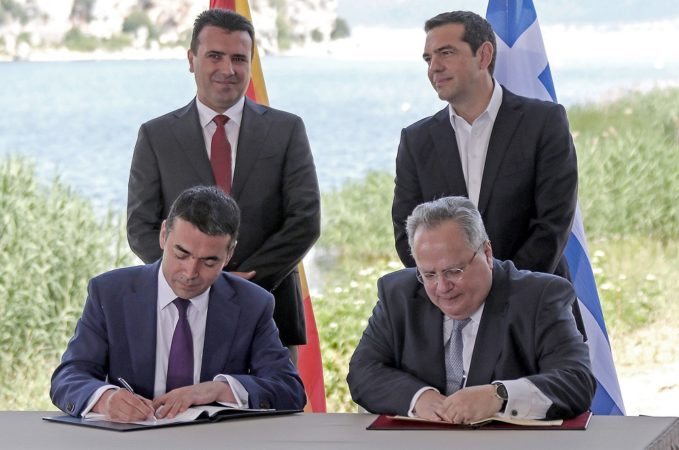 The Western Balkan media reactions about the Greek-Macedonian agreement regarding the country’s name change.

The Macedonian Prime Minister Zoran Zaev, and the Greek Prime Minister Alexis Tsipras, on June 17 this year, after an extensive period of negotiations in relation Athens-Skopje, led by Ministers of Foreign Affairs, Nikola Dimitrov and Nikos Kotzias, under monitoring and support of Brussels and Washington, finally found a mechanism to close the two-decade dispute over the name of the republic, from Macedonia (or officially recognized as (The)Fyrom- (The)Former Yugoslav Republic of Macedonia), to North Macedonia, with preserved Macedonian citizenship (as, citizens of North Macedonia), and Macedonian language, as a part of the group of South Slavic languages. Apparently, the goodwill of the Prime ministers was not positively evaluated and welcomed nor by the media, neither by the majority of the population of the two countries, which did not avoid once again to express their public dissatisfaction at publicly organized protests, because of the “potential tremendous identity lost” with the implementation of the agreement, citing on their(s) nationalistic feelings and historic glorious past. Undoubtedly, the Macedonian and the Greek counterparts put under risk their home political power and public support, simultaneously, being recognized as one of the greatest statesmen in the international arena. In general, the Greek-Macedonian preparedness for historical change was positively welcomed and presented by the EU officials and the individual countries’ authorities, as well as regional politicians and by the regional media.

Among the loudest supporters of the Macedonian-Greek “historic agreement”, are the Croatian media, which praise and encouraged the goodwill of both countries. According to them, with the following of the agreement, Croatia expects the European Union finally to open the negotiations for Macedonian entrance in the union, and to become a member of North Atlantic Organization (NATO). Traditionally, they add that Macedonia has unconditional Croatian support in fulfilling the mission. In an article published in the Croatian media, Hrvatski list, with this agreement, Zaev becomes either a hero or a deceased. The article positively refers that Zaev is a “rational hero”, who will find a release from the deadlock situation in which Macedonia was found. With this, the NATO membership for Macedonia will be open, and Macedonia will become a part of the European Union. Moreover, by joining NATO and the EU, Macedonia stops being a “chronic patient” in the Balkans whose territory or affiliation is constantly or all of its neighbors tossed out: Bulgaria, Greece, Serbia, and Albania. Very similar perspective, providing an objective overview of the political happenings provide the Montenegrin media. Al Jazeera Balkans, published an interesting article, comparing the political situation in Macedonia and Bosnia and Herzegovina, referring to the fact that, the signing of the agreement between Macedonia and Greece is a “good news” for Bosnia and Herzegovina, also because it sends a message that it has come to an end with political elites that build their importance on causing national, ethnic and regional problems and conflicts. However, an agreement is needed for authorities that are striving for progress and accepting compromises, which, for now, is not the case in BiH.

The agreement was also positively welcomed by the political authorities in Kosovo and Albania Hašim Tači, Ramuš Haradinaj, and Edi Rama on their Tweeter profiles, explaining that "Progressive leaders of neighboring countries today wrote a story and showed the EU and the world that the vision and readiness to overcome the past can find a place in the future and where it seems that it does not exist."

In spite of this spark of regional positivism, the Serbian politicians and the Serbian media do not accept the historic Greek-Macedonian agreement with the same glory and enthusiasm. In spite of some of the Serbian daily and online media, which provide purely informative and objective transmission of the events, some of them laid on, and followed some of the Macedonian media, whose journalistic displays are based on fake news, accusing the Macedonian government for this historic mistake and capitulation. An example of this, are the condemnation of the Macedonian Prime minister Zoran Zaev for “his preparedness to allay NATO, with the price of beating children and women” during the demonstrations organized in Skopje. Also,  for the Serbian daily and online newspaper, Vecernje novosti, the Serbian minister of Foreign Affairs expressed an opinion that Serbia did not congratulate Macedonia for the agreement that the Macedonian government reached with Greece because, as he said: “there is nothing to be congratulated”.

Whether this Greek-Macedonian momentum will have a positive epilogue is early to predict. Although, the Macedonian and the Greek authorities found a “common ground” for resolving the long-lasting dispute, its own contribution and a positive vote should also provide the public opinion of the countries (referendum in Macedonia should be organized), the opposition parties, as well as the positive vote of the Macedonian President.

Previous article Comparison between the political rhetoric of Thessaloniki Summit (2003) and the Sofia Summit (2018) Next article Hashim Thaçi: A Look at his Life Career