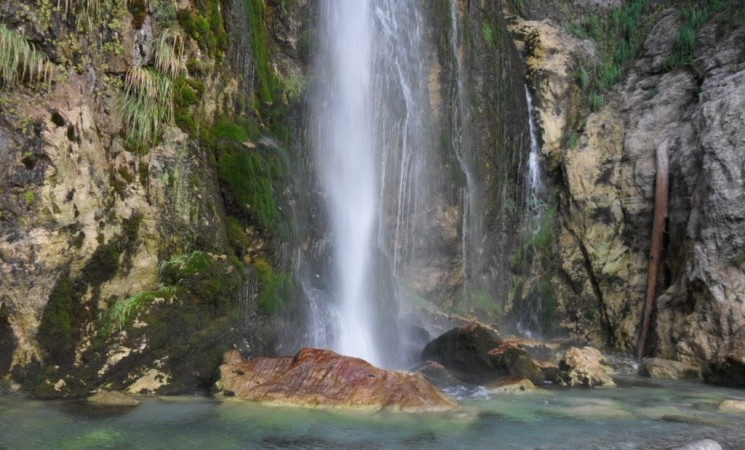 Since I was in high school, I learned a lot about the travels of the British writer Edith Durham, who visited and wrote about the traditions and culture of the Eagles. She described the natural beauties of Albanian Alps and especially the hidden treasures of the village Theth, which she thought was the most beautiful village ever seen. Trying to follow her steps, under the warmth of the sun, I walked through the wood, smelling the fresh scent of savage flowers, listening to Shala`s river beats, trying to discover the hidden waterfall, and the blue eye natural beauties, the canon stories inside a tower build five centuries before used as the place of reconciliation of conflicts.

At the moment I reached the Lock-in Tower, I felt like the words from the stories I had read were whispering from the two small windows of the tower. When I approached the garden, the guide smiled happily. He was not pretty much robust as Highlanders usually are, but was keen, smiley and always in a hurry to start re-telling the stories about the strange tower.

“I have studied two faculties, my grandfather, and my father", said Sokol enthusiastic. “Surely you must have heard about the canon, it cannot be read, it is told and re-told from father to son and grandfather to grandson, but the most important it is felt deep in your heart. As you go deep in this tower, the walls reflect the isolation, an energy of revenge which is spread from the deepest heart of the inhabitants.

“Theth is a small village with a picturesque relief, which hides so many natural and historical treasures underneath the characteristic green," says Sokol dressed in a traditional suit with the typical Highlander hat, called by the local qeleshe, while he was opening the door of the Lock-in Tower in the center of the village. He is the inheritor not only of the tower also of the blood feud stories. As you climb the small stairs inside the tower to go on the second floor, you will find walls of stones, scratched by time and the Albanian flag hanged on. You will walk on the traditional small carpet with red and black ornaments until you see in front of the window an old cradle. Sokol approaches the cradle, turns it down and explains its story “The elder of reconciliation put the sex male child from the culprit family with the cradle down and waited for the decision of the victim`s family. At the moment of the pardon, the cradle was turned because the child was risked getting stuck ever after”.

At this moment, I felt a blood pressure inside my veins, trying to follow the shadows of the victims, the crying of a child in a cradle, the old men who negotiated both life and death. My backpack had become heavier, full of stones, whispers from canon, stories which waited to be finally written and known outside the isolated village.