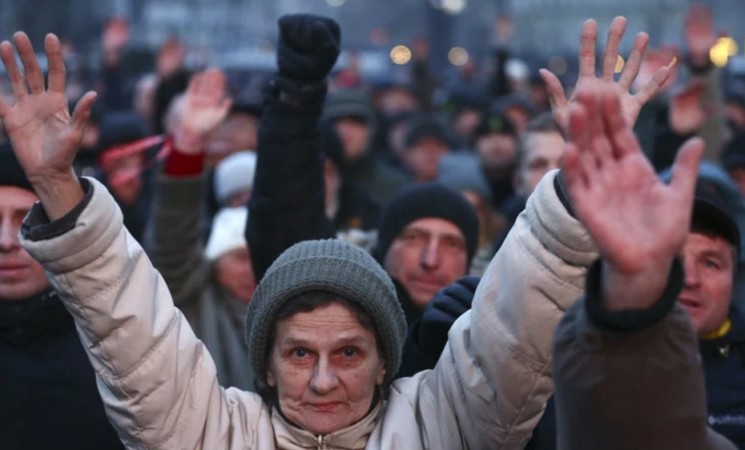 On August 9, presidential elections are planned to be held in Belarus. This year, instead of the usually predictable campaign, several events placed these elections to a center of attention and debates.

What is happening in Belarussian now?

The first major shift happened with the detention of activists on a meeting, launched on May 29 in support of presidential candidate Svetlana Tikhanovskaya. During the peaceful manifestation, several activists were arrested, including a famous blogger Sergei Tikhanovsky. [1]

The other repressions against non-Lukashenka candidates were aimed at Viktar Babaryka, head of Belgazprombank. He was arrested together with his son Eduard on June 18, claimed to be connected with cases of corruption and ‘dubious ways’ of financing his electoral campaign. [2][3] Besides, the accounts of Babryka have been arrested, and the search was carried in the premises of Belgazprombank days before charging Babaryka himself.

These actions were also supported by threatening other citizens who were not afraid to openly protest against the actions of the government. Physical violence, arrests on far-fetched occasions and fake evidence, dismissal from work - this is just a small list of measures against the protesters. [4] These actions were aimed at journalists, artists, athletes, human rights defenders, and other activists. The latest example was an arrest of Igor Losik, a moderator of the Telegram news channel “Belarus golovnogo mozga”, for ‘organizing mass riots’. [5]

Overall, 103 people received punishment in form of arrest for approximately 1,388 days on all administrative charges used for political prosecution. At least 120 people were charged with fines, in total equal to the amount of 105,000 Belarussian rubles. [6] More than 20 people were recognized as political prisoners. [7] The mass repressions were condemned by the EU [8], OSCE [9], Amnesty International [10], and other world actors.

The reaction of society and further challenges

The actions of the government lead to an active public response. Belarussians are involved in collecting signatures for opposition candidates, fundraising and other support for political prisoners, as well as participating in demonstrations against the governmental repressions. The latter could be shown on the example of so-called “Chain of solidarity”[11], where people stand hand-by-hand in support of unlawfully arrested and showing their desire for change. This idea for protest was supported not only in Belarus, but also in Poland, Germany, the US, Belgium, and other places worldwide.

Until July 14, Belarus should pass the stage of presidential candidates’ registration, where several violations have already occurred. The electoral commission rejected Yuri Gantsevich, Valery Tsepkalo, and others in registration because they allegedly "did not collect the required number of signatures."[12] From the subsequent stages of the presidential race (i.e. election campaigning and ‘early voting’), one should also expect Lukashenka's next attempts to confront the opposition in various ways.

Why the flow of presidential elections has changed dramatically?

The governmental response to the COVID-19 pandemic has raised negative reactions to society and only contributed to the death dynamic, and placed a major burden on the already shaken health care system in Belarus. The other factor here could be the recent set of summits for the ‘unified state’ with Russia, which was negatively treated in Belarusian society.

The internal reasons mostly concern the broken promises of Lukashenka given during his 25 years in the office. The economic stagnation, deterioration of living standards, and constant repressions from the governmental side – these are the factors of the growing discontent with Lukashenka’s regime. [13]

The sharp change in the usual ‘boring’ presidential race is not only a matter of resonance but also an indication of the underlying problems of the Belarusian administrative apparatus. At the same time, these elections represent hope for Belarussians to finally get the changes for which they have been waiting for almost 25 years.

The anti-power mood provoked a tough response from the government. Lukashenka and his supporters, not accustomed to such a zealous rebuff, use the good old methods of terror and intimidation, including the public insult of presidential candidates, conducting an unfair electoral campaign, repression against those opposing, as well as several other actions.

In such a situation, it is necessary for the Europeans to show the support to the people of Belarus, and to finally formulate clearer policy guidelines regarding Belarus in the new realities.

Previous article Unexpected outcome of the Croatian parliamentary elections Next article One Year of Zelensky’s Presidency: political promises and popularity