Opinion - Ukrainian Revolution of Dignity: What we stood for and where we came to

Home Blog (en) Opinion – Ukrainian Revolution of Dignity: What we stood for and where we came to 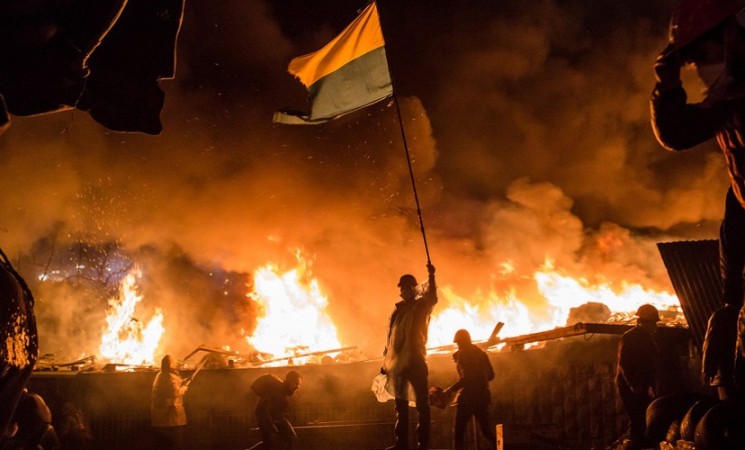 Today, news about Ukraine sounds silently on the background. Day after day the world is getting further from events that shook the globe 4 years ago. It feels like the problem was solved, but the situation in Ukraine is still difficult.

This is the chronological order of one of the main turning points in the history of my motherland, when Ukrainians paid their lives to prove their choice of liberty.

November 21, 2013: Ukrainian government gives up the signing of EU Association Agreement. Hope of millions Ukrainians on a better, fair future with high European standards of living is ruined. The only perspective is waiting ahead: back into captivity, back to Russia. We have already had enough of it and we cannot keep silence, so the protest movement “Euromaidan” begins. Hundreds of students gather on the Independence Square in Kyiv, showing their disagreement with the government’s policy and their European choice.

November 30, 2013: The end of Vilnius summit, where the Association had to be signed. Major part of desperate protesters leaves Maidan and those, who remain are dispersed by the special police force “Berkut”. Horrible pictures and videos of that ‘bloody night’ spread rapidly across Ukraine, causing an explosion of fear and anger.

December 1, 2013: About 80.000 people from different parts of Ukraine come to Kyiv. Mass protests begin in separate regions as well. This time it is not just about the European choice, it is about our dignity, our demand on democratic country with a freedom of voice: the corruptive, pro-Russian government should be drawn from power.

December, January 2013–2014: A long and deplorable struggle of the folk for its rights is at its highest. This winter unites the whole Ukraine from East to West as much as never before. The protests continue and the President gives the fatal orders of killing his own citizens, claiming this is for keeping the order. On January 19, “Berkut” shoots peaceful protesters on the Hrushevskoho Street, while they are heading from Maidan to the Parliament.

February 20, 2014: Near 67 protesters are killed by snipers. News about mass shooting hits the whole world, president Yanukovych flees to Russia and the parliament takes control over the country till the presidential elections on May 25, 2014. That is the point, when we all think the new future begins, but…

Year 2018: Crimea it still under Russian’s control, the war in the eastern part of Ukraine takes away lives of our best people and cripples lives of thousands. The unemployment rate increases, 60% of Ukrainians live below the poverty line, while the officials enjoy their wealth. Even though, some important steps towards political and economical transparency were taken, the Association with European Union was signed and ratified, the corruptive system itself did not change, but only changed its faces.

Previous article Hashim Thaçi: A Look at his Life Career Next article HOXHA’S COMMUNISM AS THE ROAD TO NATIONAL UNITY: Explaining the Synthesis of Communism and Nationalism in Post-War Albania

Anastasiia Lazuka is a Ukrainian who is currently studying Mass Media and Communication Science at the University of Vienna and is also doing her Master’s in Journalism at the Lesya Ukrainka Eastern European National University in Ukraine. During her studies abroad she tries to bring the topic of Ukrainian crisis back to the European news, by doing internships at the online media news platforms and open channels. Her core goal is to encourage and support the democratic development of all the European countries and to contribute to safety and integrity of the European society.