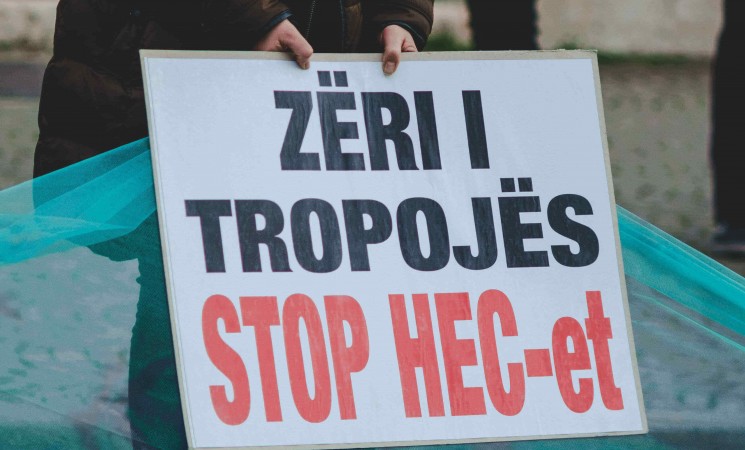 The news of more hydropower construction in Albania is perhaps not surprising given the rise in investors and the large amounts of freshwater resources that the country is endowed with. When residents of the Valbona National Park first heard of plans related to hydropower plant (HPP) development on the Valbona river, and then saw construction work had begun, with the minimal resources they had, they put together a campaign aimed at stopping this process.

Hydropower development is connected to the issue of energy security in Albania, however, it is not the only solution to the problem and alternatives exist.  Perhaps the most evident to one of Europe’s sunniest regions, is solar power, though for some reason, despite the excellent geographic location to exploit it, the government is keener on the old-fashioned HPP construction permits. In contrast to fields of solar panels, what does the Valbona river mean to local residents, and what is the consequence of hydropower construction permits? The answer is life. The river means life, not just for the natural habitat and land that people are so attached to, but it is a way for the community to make a living; to stay in their homes; to survive.

The first step in stopping the construction of hydropower plants in the park was for the Valbona residents, led by a local conservation NGO (TOKA) to seek justice in court. They requested that the court opens a case to investigate the irregularities that took place, namely allowing a construction project of great proportions, which would destroy natural habitats, to take place in a protected area. What is more, the relevant authorities were sued for not enforcing the law on consultation with the public, and for illegally approving the environmental permit.

For the 14 hearings that followed, the residents of the national park made nearly impossible journeys to attend the court hearings, sometimes even twice a week. The initial result of this legal battle was that the court denied the locals the right to a legal investigation, and were simply sent back home. Somehow, in the deliberation process, it was deemed irrelevant that the law on protected areas, which only allows minimal interference in such habitats, and prohibits industrial work to take place, could be of any use in the verdict and request of the local residents. However, the activists of Albania are pushing forward the legal battle with an appeal.

A small group of Albanian activists joined the locals in Valbona to protest the court’s initial decision and the actions of the government who supported a concession that had initially been granted by the former government, back in 2009. News of the protests did not reach a wider audience, and even an already published article vanished. In an ironic turn of events, Albania had just hosted a Balkan-wide event of freedom of the media, where the EU themselves, pledged to strengthen the free media in the region. It would appear that Albania has not rushed to honour the commitment to free press so soon, in a context in which it is becoming a norm that especially mainstream news agencies have been captured, by both political, and economic elites within the country.

The first protest was followed by another, in Tirana, on the 18th of November 2017. The protesters demanded that the government protects the people of the Alps, cancels the project, and respects the rule of law. Though the media coverage picked up a little bit, no major outlets reported it. The entire traffic on one of Tirana’s main boulevards was stopped, people raised their voices in front of the government, made themselves heard, while the mainstream TV stations were strategically silent about the issue and the demands of the activists. In these circumstances it becomes much harder, that a community already in isolation, can be heard and supported by the larger Albanian and international public, making it a small opposition.

To most, perhaps this is yet another environmental issue, and a fight to protect a river. In truth, the issue of Valbona has many more implications: political, economic, cultural, and legal. It is a prime example on how a Balkan government is not only failing at developing rural areas in dire need of economic opportunities, and thus, curbing alarming emigration rates and asylum seeking applications from Albanians across Europe, but dictating that private companies can move into protected natural areas to exploit the remaining residents’ most valuable assets, and deny the community the chance to earn a living in one of the few ways they can: tourism. Why is it that even the most patriotic Albanians are leaving their country in droves? The answers are complex, but the reality is that many times in the state’s ‘transitional’ period, consecutive governments have worked against the public interest, and for private interests, capturing the state and its resources; this brings us to the very case of the Valbona National Park: one private company will profit from hydropower plants, while an entire community, who has protected Albania’s natural resources and preserved its cultural traditions, could be left with few ways to make a living.

Nonetheless there is hope for change when a small, isolated community, with few resources, holds the government to account for all of the ways they abuse the power given to them by the citizens of Albania. In the context of media censorship, support from abroad helps, while the minimal reach that non-advertised posts have on social media also make a small difference. The crafty Valbona campaign will continue with another protest in Tirana on the 2nd of December, through time in this case means money for the investor or a source of life for one entire community.

Adelina Stuparu is a consultant living and working in Bosnia and Herzegovina. She specialises in research and communications, and has a keen interest in grassroots political initiatives in SouthEast Europe. She graduated from Essex University and Trinity College Dublin. (Or in short, Essex and TCD alumna).