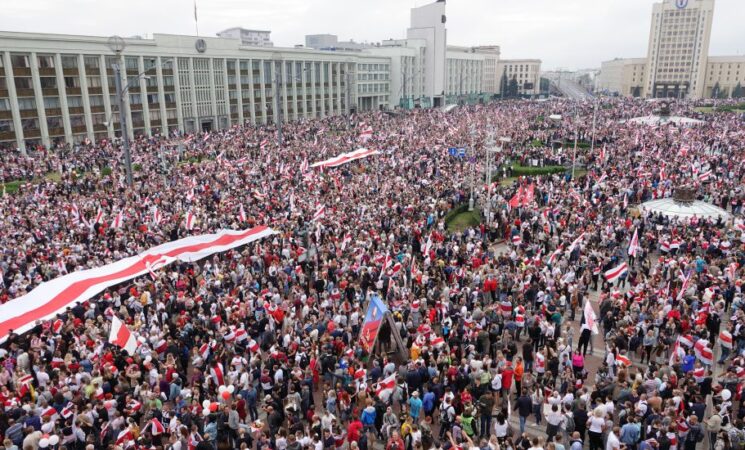 Instigated by a rigged election by 26-year leader Alexander Lukashenka, the Belarussian people took to the streets. Within two nights of the election more than 100,000 packed into central Minsk demanding the ‘last dictator of Europe’ step down.

Lukashenka faced serious opposition this election by a 37-year-old English teacher, Svetlana Tikhanovskaya, who registered as a candidate in place of her arrested husband Sergey Tikhanovsky. Lukashenka stated he had won with 80% of the vote, with Tikhanovskaya gaining only about 10%, although Tikhanovskaya insisted that if her votes had been properly counted she had polled to receive 60-70% of the vote.

There is no definitive way to tell the popularity of Lukashenka as independent polling is mostly illegal and government polls are often kept secret, although many believe he had wide support until his recent mismanagement of the coronavirus alongside a failing economy. Just to mention here, Lukashenka's COVID-19 prevention measures were vodka, saunas and hard work.

"Everyone cared for each other so much. Women usually started protesting early in the morning and almost till the evening, they got hungry and tired but they were still standing, so our men were buying food and water for them. They also bought flowers and gave them to women. Every single protest was like that. Everyone sticks to each other, carries flags and posters, screaming жыве Беларусь. I have never been so proud of my people."

All of this occurred in the face of great government retaliation as police fired tear gas, rubber bullets, and stun grenades into the crowd, leading to violent clashes that led to 3,000 arrests in the first day and 3,700 around the rest of the country in the following nights.

Ms. Pechenina described the riot police as the “cruel one” brutally taking the life of one man and placing snipers on rooftops near protests:

"They threatened even a 15 years old boy with a grenade, they beat teenagers really hard so one of them, a 16 years old boy, died. They stopped cars, crashed them, dragged people out of cars and beat them. There were two cases. The first one when the riot police crashed a car, with a 5 years old girl in it, with a huge military truck, and the girl got hurt really bad. The second case was when the riot police threw a smoke grenade in a car full of two kids and their parents. They detained old people, young girls and boys, women and men. The police there did not give them food for 3 days. They tortured women and men with a bat. However, even after all of it Belarusians are not afraid and will fight."

Lukashenka and his police have no regard for the Coronavirus as described by Ms. Pechenina:

"First of all, when a lot of people got detained, the police usually put around 40 people in a cell for 3-4 or even more people in a cell for 6. There was a story of a guy who was caught by the riot police and brought to Okrestina. He was saying that he was in a cell for 3 with 38 people. And one of them had coronavirus. So this guy got it too. Those protesting do not care either, me as well because there are much more dangerous things happening right now and people die from it and in much worse conditions."

Economically, the people of Belarus are hurting: “All people from factories protest almost every single day,” states Ms. Pechenina. “People started buying currency like crazy because of what's happening in our country. Almost every bank does not have dollars and euros.”

Before the election, authorities arrested 33 Russians accused of election disruption, but now that Mr. Lukashenka has been asked to step down, his tone has changed with Russia as he has turned to Putin for help. Putin congratulated Lukashenka on his victory, endorsing the results alongside China, but several high-profile Russian politicians have called the election results falsified and urged Lukashenka to leave, calling into question his Russian support.

Putin has claimed he will send in the military if the protests continue. According to Deborah Haynes, foreign affairs editor from Sky News: “Russian intervention would put western powers in a significant dilemma -- intervene as well to support the opposition and risk a direct confrontation with Moscow, or allow another part of Europe to fall further under President Vladimir Putin's sphere of influence following in from what happened to Crimea and eastern Ukraine.”

There should be no debate, the West must take firm action against Lukashenka and Putin while they are at their weakest. Putin is showing less clear signs than Lukashenka of losing control of his state order, but the signs are there nonetheless. In the poisoning of russian opposition leader Alexy Nalvany, Putin has taken the mask off his false democracy and shown he is a dictator fighting to maintain order.

Both men have been in power for the last twenty years, but time has taken its toll and they are looking to each other for support, it is the role of the west in maintaining a strong europe and free democracy to not let this support be so readily available.

In the meantime Lukashenka, dressed in military fatigues, made claims of NATO forces at the border, placing his armed forces on "high alert.”

By the way, president Lukashenka came to power in 1994 after the collapse of the Soviet Union in 1991, but maintained much of the same order with a state-controlled media and a secret police that still holds the KGB title.

Zhenya Jane Pechenina is a Journalism and Communications student at Anglo American University Prague. Currently living between the Czech Republic and Belarus when not at school she is a working journalist in her home of Minsk.

Previous article Development of Eastern Partnership Strategy during the 9th Legislation Next article Lithuania: A Country with Strong Support of Belarusian Civil Society