Albania's Path towards the EU 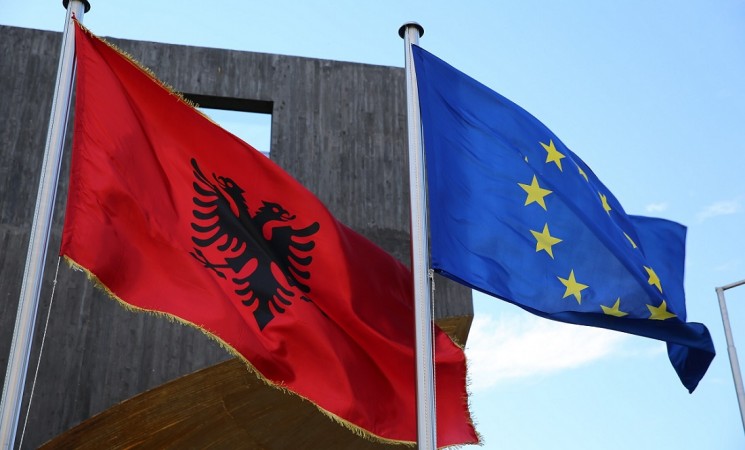 From time to time, Albanians watch TV to see one EU representative - the Enlargement Commissioner - talking and reporting about where Albania stands according to EU standards. Apart from good/bad distinctions and Albanian’s pace towards being an EU member most of the citizens do not understand much more about this. Mostly, this happens because they also don't see a lot of progress and changes in their everyday life. Also, the EU negotiates first and foremost with the government, which stands in between throughout the whole procedures.

Moreover, you can read and see about the changes in the news, where certain dialogue happens and whether laws get approved or not, but in the streets, at schools and at works, ordinary people do not necessarily feel the vetting (the re‑evaluation of all judges and prosecutors) or the lessening of corruption and so on.

The EU somehow made it easy for us. It gave us 5 main points to concentrate on and people keep repeating them hysterically, almost losing their meaning: First, establishment of a professional and depoliticized administration; second, enhance the impartiality of the judiciary; third, strengthen the fight against organized crime; forth, strengthen the fight against corruption; and fifth, reinforce protection of human rights. All that leads us to the idea that the political system right now needs strong reforms.

In the first place, the Law of Public Administration with concrete procedures on how to deal with the administration and its implication with politics was approved. Also, Albania is fiercely taking forward the judiciary reform, fighting organized crime after the boom of marijuana and punishing corruption.

Nonetheless, I can evaluate the situation and say that at least Albania tries to do something but about human rights the country still didn't do much. Just have a look at how Roma people or/and women are treated by being thrown out of their homes.

Albania took everything step by step by the 2013 Law 90/2012 “on the Organization and Functioning of the State Administration” which brought some improvements. At that date, however, the articles of the new law were not prepared and the change of the Government has slowed down the operational functioning of the administration, including the drafting of the new secondary Civil service legislation, which was later on approved.

In this regard, there is an absence of a central information management, circulation and monitoring system, a lack of transparency and openness related to the administrative decision-making process, and an insufficient cooperation and coordination system between ministries.

Also, most of the ministries do not update their website constantly. And this was also shown in a report about Public Administration from High State Control: The effectiveness and efficiency of this system has not yet been met and it is still not known when it can be realized. This was one of the faults of the law. It is true that more young people are being employed at the public sector but they only get short time contracts which is seen more as a publicity from the current government than a solution to the issue.

In the last six years, Albania, which scored 38/100 on the recent Corruption Perceptions Index, experienced some improvements with the passage of a ground-breaking judicial reform package – considered as ‘the first of its kind in the region’. But, this is all, apart from a few more points and positions in the global ranking, ordinary people haven't seen much of this because the perception of trust in the government is still low.

In 2017, a substantial reduction of cannabis cultivation and a considerable increase of seizures in particular of stocks of cannabis were detected. This helped the state to get control over areas which were highly cultivated by cannabis. On the other hand, as well as in corruption, only small fishes were caught. Even the EU mentions this in the 2018 report by stating that the sentencing of high officials for corruption and powerful drug dealers is still low.

Even though it now seems a reality of being closer to the EU we should reconsider its approach to the negotiations chapter by chapter. To often politicians see every EU report as their own success, using it as marketing to the citizens who actually hold great esteem for the idea of Europe. But starting to work for Albania’s progress and not only focusing on making laws and some PR actions is the thing the country really needs further to do.