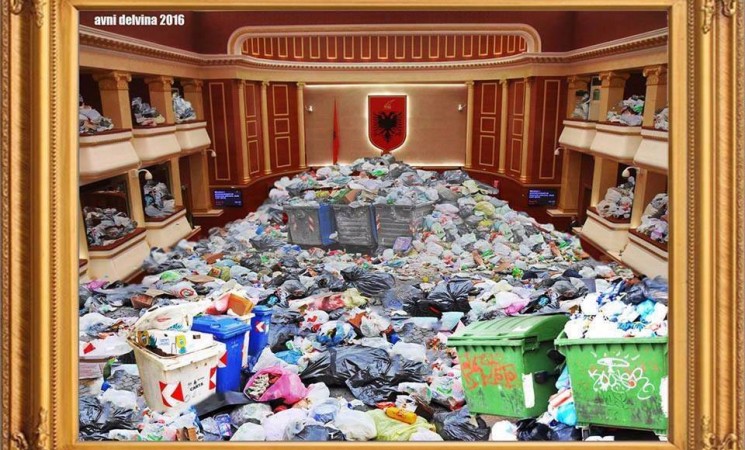 As the Socialist party of Albania won an overwhelming majority in this year’s elections, it has also managed to consolidate its power. In theory the party praises itself in its willingness to pursue much needed change, and secure Albania’s integration in the EU. In practice, the Socialist Party’s governance shows many contradictions, both at the local and national level. It is without doubt that the party is dedicated to portraying itself as ‘cool’ or ‘modern’, however, beyond the cosmetic developments, governance in Albania shows very little genuine concern for citizens and sound development processes. From infrastructure projects that abuse human rights, to the exclusion of those who wish to genuinely shape policy and bring about change, Edi Rama should be accounted for the means through which he governs. Coming from an artistic background, it only seems natural that the Prime Minister would be concerned with how the country looks like, but he is seemingly ignoring the fact that modernising a country goes well beyond appearances, also implying values and actions based in real democratic practices, not tactics resembling the country’s authoritarian past by imposing projects against the will of the citizens impacted by them.

This year, Edi Rama announced his innovative co-governance platform, which will attempt to rely on the active participation of citizens, as well as taking people’s needs and concerns to account in the way PS will govern. The implementation of such a strategy has already been criticised by Albanian citizens, especially among the country’s civic activists, who have long been excluded from participation in decision-making. At this point, the platform runs outside of the legal framework, and many issues related to transparency remain. As both past and recent events can attest, some of the public has been keen on these processes, trying to both gain the attention of politicians while pursuing long-lasting environmental or political campaigns, or reacting to developments proposed by the local and national government. Their efforts at shaping public policy however have either been used to advance political gains or have been marginalised.

AKIP Campaigns and the issue of importing waste

One of the most exemplary cases which reveal the commitment of Albania’s activists to be heard by decision-makers is the long-term campaign against the import of waste.  Since 2004, it has been an on-going battle to convince the government not to pass legislation that would facilitate this. Those pursuing these efforts have campaigned against the will of both the Democratic and Socialist Party to implement the law. Before winning the 2013 general elections, the Alliance against Waste Imports (AKIP) demanded a referendum on the matter, which the Socialist Party supported while in opposition. Garnering all strengths and efforts, AKIP managed to gather the 60 000 signatures required for the referendum to take place. During the 2013 election campaign the Socialist Party declared that the party will kill the law once in power, and that the referendum was not needed. And so the activists hoped their struggle would finally be over, yet still on alert. Needless to say, the party eventually broke the promise and brought the law forward to again be debated in parliament. Many more meetings ensued between the activists and the government, while protests against the import of waste continued, and still need to be organised to date. The government has not taken into consideration the concerns of thousands of citizens, who have tirelessly tried to influence decision-making for this particular environmental purpose for the past 13 years.  On Sunday the 17th of September, AKIP once again sent an open letter to the Prime Minister asking him to stop the law, and providing alternatives to the overall waste management strategy. The letter was sent precisely within the context of his ‘co-governance’ platform. The press suddenly exploded with mentions of the issue, and finally PS representatives declared to the media, that the overall law for management would be reconsidered according to popular demands. It seemed like another victory and that AKIP once again managed to convince the Socialist Party to be on their side. However, hours later, Edi Rama appeared on the Voice of America and said that those protesting the law were ‘charlatans’. He then continued to say that they will speak to ‘the people’ about it, possibly within his own co-governance platform where the party organises the meetings, rather than in the opposite context, where grassroots efforts seek to reach to politics to raise their concerns.

At the same time, Albania has in theory facilitated the participation of the public in decision-making processes through legal frameworks, namely, by making the authorities organise public hearings on issues of public interest. These hearings however have not accounted for much success, not because the public did not wish to be involved, but because they took more the shape of ‘secret’ public hearings. This was confirmed to an extent by the leak of an email from the Tirana municipality sent out to a select number of people, NGOs, and representatives of the international community. The email was a formal invitation to a ‘public’ hearing, but at the same time, the general public could not know of its existence. The email also specified at the bottom that its contents were ‘confidential’ in nature. Many more irregularities took place regarding the organisation of these meetings. When publically announced they would generally be advertised very last minute, not giving the needed amount of time for the public to participate. When I attended such a last minute hearing, on the new Urban plan for Tirana, I ended up arriving in the very middle of the event, and I did see many activists present, who raised many concerns, though they were of course ignored, as the meeting itself did not seem to be structured in a way in which it would take into consideration the public’s needs and concerns, but a mere presentation of what was going to be implemented, in itself a very modern looking fairy tale with urban farms, cycling lanes, recycling plants, all resembling a sci-fi project, given the current local situation in Tirana.

Infrastructure at the expense of human rights

Overall, there is a stark difference between the situation as presented abroad, and the local reality. A curious incident I came across for example, was when the Social Democrats won the parliamentary elections in Romania, and while contemplating to move abroad in discontent with the result, Romanians were advised not to look forward to Western countries, but Albania- as it was a much more modern country, some mentioning of course, the ‘amazing’ fast motorway links and the government’s real and visible efforts to improve infrastructure [Unlike in Romania]. And while yes, roads are being built, this infrastructure comes at a high price for the residents who believe will suffer grave consequences and resist the plans.

The local authorities of Tirana displaced the Roma community, demolishing their homes, and promising new houses at a different location under the pretext of protecting the community from floods. However, the area is also the site of a future ‘world park’ within the new urban plan. The Roma community were forced to live in harsh conditions after they were expulsed from their accommodation. A proposal to solve the problem was however acknowledged, namely, the building of a ‘caravan’ park for the community to live in. However, this community lived neither in tents nor caravans.  They had real homes, were settled in a neighbourhood, and so they became homeless as a result of the local government’s actions.

Given the more general trend in the government’s actions to demolish homes to build infrastructure or to ‘renew’ cities, others have begun to protest the plans. Such is the case of the Greek minority in Himara, who have protested urban renewal plans that would demolish their homes, and have been violently repressed by the police in return.  The residents and some press have referred to the situation as houses being ‘illegally occupied’ and that they were at risk of eviction without compensation. Concerned about their homes and community, the residents have protested throughout the summer, while the issue has even taken an international dimension: the Greek Foreign Ministry declared that’ Albania seems more concerned with abusing minorities’ rights than with EU integration’. Most recently, residents in the village of Shkoza also blocked the road stopping a process of road expansion which would see more than 150 people lose their homes. In this case too, they were met with police brutality rather than concrete plans for compensation or community mediation.

In the capital last year, the Tirana government began building a children’s playground in the protected area of the Lake Park. As soon as citizens found out about the plans, many resisted the development and formed a human chain to stop the government from cutting down the trees. They too were met with police violence. In a Ted Talk, the mayor of Tirana, Erion Veliaj, expressed his sadness at the fact that some of the city’s residents were not ready or willing to see any positive change in their city, or caring about children for that matter. He sounded like a local hero, modern mayor, only trying to transform his post-communist city, but who unfortunately had faced backlash from what he was essentially describing as narrow-minded individuals. In truth, the people protested, not the children’s playground (made clear in statements), but the fact that in a city dominated by concrete and lacking green spaces, instead of the government giving children a healthier environment to play in, it was bringing large amounts of concrete into a protected area, and the only significant natural space children had in the city. The plans were not only in contradiction to the Aarhus Convention, which Albania signed, but also contrary to the visions that hundreds of residents had for their city. The playground was eventually built.

The Socialist Party however continues to promote the idea that it cares what citizens are concerned about, and that it is ready and willing to implement their vision for the future of the country. Yet it seems that in practice, when they disagree with government plans or believe they are being misrepresented, they will be violently forced to stop resisting the government’s plans, a solution that is not an isolated case but becoming an increasing trend. It is precisely for the amount of power that Albania’s PS has accumulated that it should be closely watched and held to account. The so called co-governance platform could very well be strategically used to gain legitimacy for the governments’ actions by promoting approval of citizens unaffected by projects such as those related to infrastructure, while suppressing the minority of residents that will be severely impacted by their consequences.

Previous article Kosovo's Independence and its economy Next article Is Croatia on a road to ban totalitarian symbols?

Adelina Stuparu is a consultant living and working in Bosnia and Herzegovina. She specialises in research and communications, and has a keen interest in grassroots political initiatives in SouthEast Europe. She graduated from Essex University and Trinity College Dublin. (Or in short, Essex and TCD alumna).