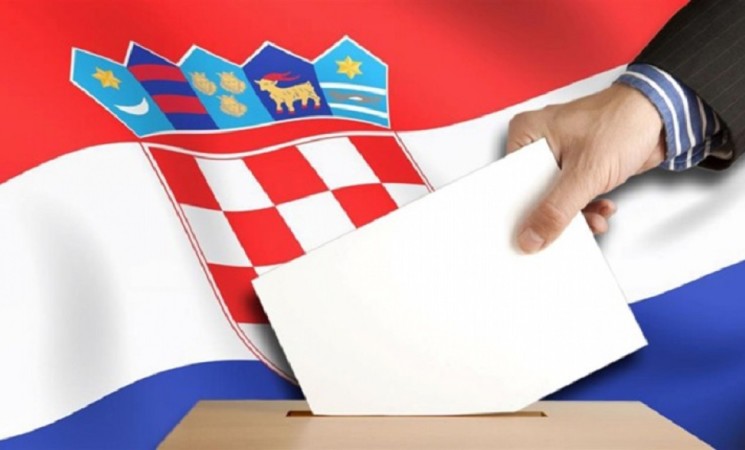 Following the end of the first Croatian Presidency of the Council of the European Union from 1 January to 30 June 2020 and the decrease of infected cases from the Corona virus, parliamentary elections were held in Croatia on Sunday 5 July 2020.

As in almost every European country, the political system in Croatia is based on a clear division of power between the executive, legislative and judicial branch. The executive consist from the directly-elected President with its five year term and the Government, headed by Prime-minister with its four year term. The Government is proclaimed through the majority in the Parliament (Sabor) which is part of the legislative branch and elected on the state level. On the local level, citizens are entitled to vote for representatives of local municipalities for a four year term [1]. Various electoral systems were changed after the first multi-party elections in 1990, even introducing the bicameral system with the Chamber of Counties and Parliament until the constitutional reform in 2000 [2]. Following this reform, Croatian electoral system was divided into 12 electoral districts with the use of the D'Hondt system in allocation of mandates in the parliament. Among them are 14 representatives elected from ten electoral districts respectively, three are elected from the XI electoral district representing diaspora and eight representatives are elected among national minorities representing inter alia Serbs, Italians and others in the separate XII electoral district. In sum, the Parliament consists from 151 representatives, meaning that 76 is the number needed for an absolute majority in the house which is a prerequisite to form a Government. Representatives from the I – XI electoral districts are elected by proportional election method with five percent election threshold and preferential voting. The proportional system allows voting for only one candidate list and a voter may also mark one candidate on the voting ballot (preferential vote) in order to give that candidate an advantage despite not being among the first candidates on the party list for the Parliament. Lastly, representatives of national minorities are elected by the majority system without election threshold [3].

Outcome of the parliamentary election

Many polls projected a close race between two main parties, some even projected that the largest opposition party would easily secure the first place on these elections [4]. However, the projections were proven to be wrong on many levels. The 2020 parliamentary elections demonstrated a strong victory for the ruling Croatian Democratic Union (HDZ), total defeat of the Social Democratic Party (SDP), a first entry of the populist right-wing party Miroslav Škoro Homeland Movement (DPMŠ) into the Parliament and the unexpected surprise of the left-wing green coalition Možemo! („We Can“) which also entered the Parliament for the first time. Additionally, in the wake of the Coronavirus crisis, the ruling HDZ was seen in Croatia as an actor who managed the crisis situation well, which may have benefited to the election results of the HDZ party.

With relatively low voter turnout of 46.90% the Croatian Parliament looks as follows: HDZ secured 66 mandates, Restart coalition led by the SDP 41, DPMŠ with 16, MOST 8, Možemo! 7, coalition around the Party with Name and Surname (SSIP) 3, Reformists 1 and Liberal-Democrats with 1 mandate. Out of XI electoral districts, HDZ managed to win nine of them which is seen as unprecedented in the new Croatian history [5]. It should be no surprise for the incumbent HDZ to quickly form a government since it already received support of eight mandates representing national minorities and 1 mandate from Reformists and Liberal-Democrats respectively, enabling them 76 hands in the Parliament. This would, as a result, lead to the inevitable concessions of the HDZ in offering the place of the Deputy Prime Minister to the Serb party which won three mandates, which a Serb-party member Boris Milošević confirmed. This however would not be the first time for such a concession since it occurred two times before, also within the HDZ government [6]. Concerning the main opposition party SDP, its uncharismatic president Davor Bernardić announced shortly after the election defeat that he will step down and not candidate for the president of the SDP again [7]. The SDP is currently in a crisis and in need of a new leadership in order to prepare for the local elections next year.

The result of these elections probably confirmed that Milan Bandić, the long ruling mayor of the capital city of Zagreb, will most likely not secure another term in office on local elections in May 2021. This year’s parliamentary elections demonstrated a clear defeat for him since his “Bandić Milan 365 - Labour and Solidarity Party” did not pass the five percent threshold in three electoral districts which split Zagreb. In previous local elections for the Zagreb Assembly and the Mayor position, his party secured a big win. Lastly, regarding the next four-year term of the HDZ-led Government, its tasks on the EU level would be to finish the process of joining the Eurozone and the Schengen area, and on the local level to finally fix the damage caused by the 5.3-magnitude earthquake which hit Zagreb in March 2020 [8]. On the national level, new Government will be under enormous pressure because of negative economic impacts caused by the Coronavirus outbreak since almost a quarter of country’s Gross domestic product (GDP) is dependent on the tourism sector. According to the projection of the World Bank, Croatian economy will shrink by 9.3% in 2020 and grow only by 5.4% in the year 2021[9].

Previous article Gender is the new migrant Next article Presidential elections in Belarus: time for changes?

Aleksandar Novković received his Bachelor degree in Political Science at the Faculty of Political Science, University of Belgrade and has spent an Erasmus+ Exchange Semester at the University of Vienna during his BA-Studies. Afterwards he pursued further education for the Master degree at the Department of Political Science, University of Vienna with specializations in International Politics and East-Southeast Europe.During his master studies in Vienna, he completed an internship at the Permanent Mission of the Republic of Serbia to the OSCE and UN. Currently he is a trainee at the German Parliament (Bundestag) and an IPS-Program student at the Humboldt Unviersity in Berlin. His main research focus are Foreign Policy (emphasis on the Southeast Europe), EU-Enlargement and Neighbourhood Policy and Military Interventions.