Ukrainian citizens under the Zelensky’s presidency 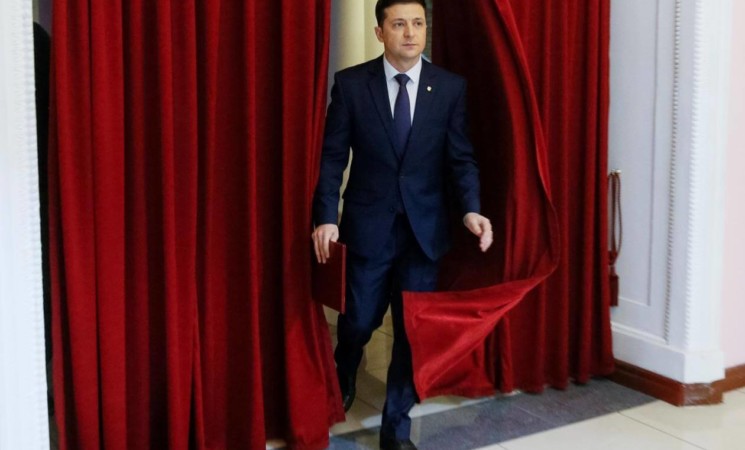 During almost 8 months of Volodymyr Zelensky’s presidency, a variety of new laws and administration bills were launched. The reforms were taken, the President made visits to other countries, the Ukraine-European Union relations are currently shaping the Ukrainian foreign policy’s focus. Moreover, there were several exchanges of prisoners of war. However, there are people who are not satisfied with the political activities of the new government. The level and way of life of ordinary people remained the same – prices are high, the salaries don’t cover the housing and communal services, medical system is in a disastrous condition.

Relation between the presidency and reforms in Ukraine

The public opinion poll conducted by media platform “Vox Ukraine” showed that Ukrainian citizens decided to choose a different candidate for the presidency since there were discontentment with the reforms which were promised by the former president and the government. But at the same time, if people are provided by any vision of reform progress, it is more likely that they “remain supportive of the incumbent politicians”.[1] Recently, Zelensky signed the law on the limitation of parliamentary immunity. Moreover, the new draft law on amendments to the Constitution was presented, which is intended to mean decentralization – central government will have less power over local branches.[2]

The single edition of the Steinmeier formula was approved at the talks in Minsk in October by the contact group on the Donbass. It emerged after the talks of Normandy contact group in Paris. This formula was suggested and named after the German President Frank-Walter Steinmeier. Steinmeier formula is a mechanism for the step-by-step implementation of the second Minsk agreement’s guidelines. These guidelines are providing certain districts of Donetsk and Lugansk regions with the special status and holding local elections in these territories. On October 1 the Ukrainian president had agreed with the formula’s text.[3] This event provoked protests of citizens on Maidan and in front of the Office of president of Ukraine. Petro Poroshenko also took a part in the all Ukrainian “Veche on Maidan” with claims of “Stop surrender”. According to Zelensky, the agreement with the text of this formula doesn’t mean the capitulation. During the press-marathon Zelensky claimed that “there will be no bloodshed during the event of organized mass rallies which the fifth president of Ukraine Petro Poroshenko is pushing to”.[4]

The exchange of war prisoners

The first exchange of prisoners was held on 7th September, 2019. The format of it was “35 on 35”. During the first exchange 24 Ukrainian sailors and other Kremlin’s prisoners returned back to Ukraine. The second exchange was discussed in Minsk on 18th December by a contact group on Donbass’s conflict regulation. The process of confirmation of lists were going on until the moment of exchange. Furthermore, the numbers have changed after the exchange itself. 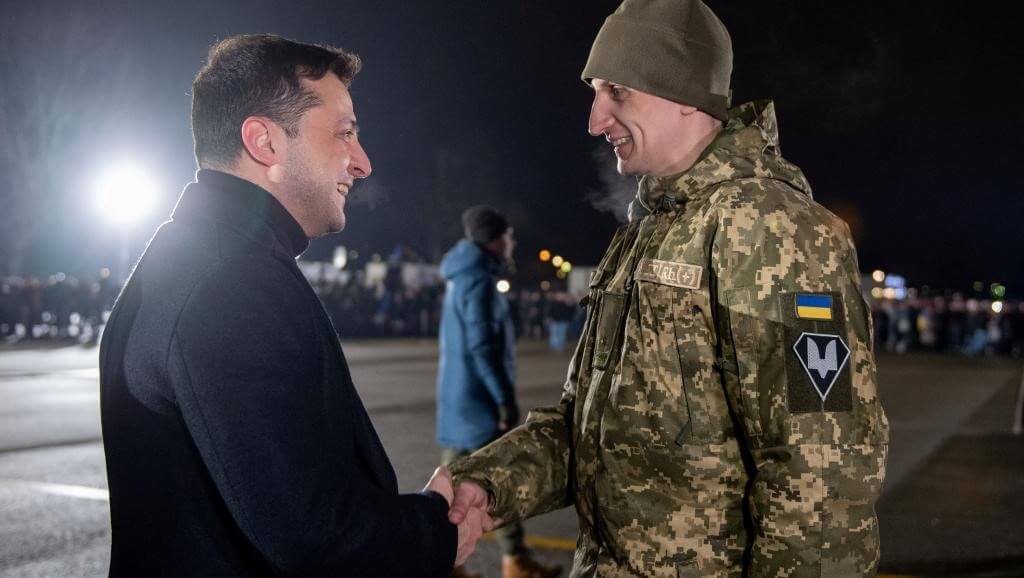 The second one was on 29th December. This time, Ukraine received back 76 prisoners and handed over to Russia 124 prisoners. From 76 people, 64 are civilians and 12 militaries (11 militaries, one Brazilian mercenary were held to Russia). Among 124 people were organizers of the terrorist attack near the Sports Palace in Kharkov in 2015 – Sergey Bashlykov, Vladimir Dvornikov, Victor Tetyutsky and the organizer of the terrorist group Igor Djadan. Furthermore, in a list of war prisoners’ exchange were former Berkut militants, who were accused in murders on the Maidan in 2014 (Pavel Abroskin, Alexander Marinchenko, Sergey Tamtura, Sergey Zinchenko, Oleg Yanishevsky), suspects of a series of explosions in Odessa (Alexander Shevtsov, Igor Udovenko, Evgeny Podmazka, Ekaterina Foteva, Vladimir Grubnik),[5] Russian saboteurs, separatists, spies and terrorists:

However, the exchange of former Berkut militias caused bewilderment, since this people were not sentenced yet. Ukrainian president claimed: “We took back our heroes; I think this was a difficult political decision. Our fighters, our military ... For us, the priority is to return our people. Five Berkut members were without sentences, two under house arrest. Three Berkut militants were in jail without a court verdict, if they remained, we would not have got our scouts, the guys who were in Debaltseve”.[7]

This event showed the partial fulfillment of Minsk agreement, where the main issues remain the same: exchange of prisoners, a ceasefire and the coordination of three new sections for the separation of forces on the contact line of the parties. This means one step to resolving the conflict in Donbass and Luhansk regions.

The petrol prices in Ukraine are dropping. This happened after the President held the meeting with oil traders. The topic of the meeting was the scheme offered by Zelensky – the reduction of loyalty programs and the reduction of the petrol prices. He rationalized it as the strengthening of the Ukrainian currency. On Tuesday, December 24, gasoline and diesel prices at gas stations of large retail chains fell by 0.5-1 UAH per liter. The national average cost per liter of A-95 gasoline amounted to 28.09 UAH, diesel fuel - 27.56 UAH and liquefied gas - 12.67 UAH. In general, since the beginning of December, the liter of A-95 gasoline has fallen in price by 64 kopecks, diesel fuel - by 99 kopecks, but the price of liquefied gas, by contrast, increased by 52 kopecks.[8]

In the meantime, oil traders asked for investigation of the illegal gas stations that held 25% of the market.[9]

However, what makes people the most anxious is the medical system and recent reforms that were taken. These reforms that were in a process since 2015 caused many changes. It started with the declarations. Declarations are the consent form which needs to be signed by Ukrainian citizens with family doctors or therapists. These declarations are the result of the new financing model on the principle “money goes for the patient”. This principle implements that a citizen of Ukraine chooses his family doctor and the National Health Service pays the contractual money to the institution where this doctor works. From 1st April 2019, the National Health Service pays to primary care providers, who providing medical services to those patients who have signed declarations with physicians at this health care facility. However, this principle has a negative effect. When the Ministry of Health terminates financing the treatment of citizens who did not sign the declaration (consent form), this violates the constitutional rights of Ukrainians, who in any case have the right to medical care.[10]

The Vox Ukraine researched the negative consequences of the medical reform and obstacles to the normal development.[11] They mentioned the lack of the doctors in the countryside, the low payment and no growing of salaries, the closure of medical centers. Three main barriers were elicited – “old corruption schemes, the frequent disinformation about reforms and problems with medical education in the country”.[12]

My name is Daria Aslanova. I am currently completing my Master studies in International Relations and Diplomacy at Anglo-American University, Prague. I had my background in International Economic Relations. My future Thesis is focused on hard relationship between Russia and Ukraine with the focus on hybrid warfare strategy. My research interests are the concept of securitization and the phenomenon of hybrid warfare. I am interested in activity of NGOs and in future I want to be focused on problems which hinder the countries of the East-Central and Southeast Europe.