One Year of Zelensky’s Presidency: political promises and popularity 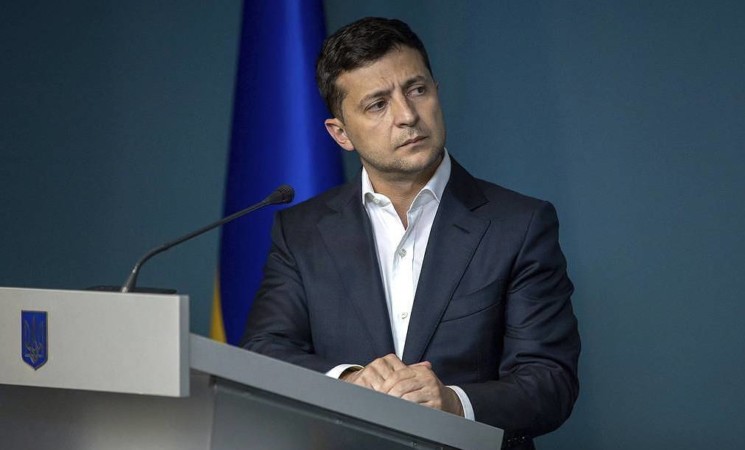 On the 21st of April 2019, Volodymyr Zelensky won the second round of the presidential election in Ukraine with 73% of votes. Nobody could predict then how the newly elected President without any political experience would govern. After the parliamentary election, his party managed to form the absolute majority in the Parliament with 248 MPs of out 424 seats. Therefore, after the appointment of the Chamber of Ministers, he had all the means to reform the country as he promised.

According to the analytical portal “Word and Action”, Zelensky gave 321 promise during the first year of his presidency including ones during the electoral campaign[1]. The majority of them, however, were mentioned by himself because his program for the elections was extremely vague and ambiguous. Now, such ambiguity plays in favour of the President because now it allows him, by speaking generally, to transform small progress into victory.

After one year in power, Zelensky managed to fulfill 36(11%) and fail 23(7%) promises. 262(82%) promises are currently in the process[2]. These results demonstrate a low level of productivity that influenced his level of support. In May 2020, the number of people who would vote for Zelensky in the presidential elections dropped to half. The Kyiv Institute of sociological research stated that 42,6% did not change their political choice[3]. In July, the Razumkov Center published results claiming the popularity of the President and his party to be 25% and 20,5%, respectively[4]. The difference in numbers can be explained by recent developments in international and internal affairs. Besides, new cases opened against the opposition, civil activists and military personnel, would make us inclined to think of Zelensky’s actions as political persecution.

However, as per the official media of the President, another reason for the decrease of his popularity becomes evident. During his election campaign, Zelensky introduced Ukrainians to him being close to the public with the help of social media. Recently, he disappeared from all platforms, while rarely posting videos. Consequently, the population that is used to constant attention from the President was disappointed by his ignorance of significant issues, like the floods in Zakarpatia and the explosion of a block of flats in Kyiv.

One of Poroshenko’s strengths was his ability to raise Ukraine to the top of the political agenda in the international environment. The choice to establish the entry of Ukraine in the EU and NATO as a priority in the Constitution of Ukraine attracted attention from the West and helped to improve defence mechanisms against the Russian aggression. On the contrary, Zelensky refused to recognize Russia as a country-aggressor, while the official statements of the Ministry of Foreign Affairs became less radical. As a result, the President created an atmosphere where Ukraine is still struggling with its problems, but all of them can be solved through dialog.

The change of the narrative created tensions between the government and the opposition due to their communication patterns and opened the frictions within Ukrainian politics to the international public. The responsiveness of foreign leaders to events in Ukraine has decreased; nevertheless, the country can still rely on their support in difficult times.

In addition, the unpredictability of Zelensky can ruin long-term relationships of Ukraine with other countries. The latest voting for the temporary members of the UN Security Council is a perfect example of a political miscalculation. Canada - a partner of Ukraine in international politics - asked the President for support during the UN elections; however, Ukraine chose not to vote for Canada regardless of promising it. Consequently, Canada lost with a one-vote margin. Such cases demonstrate how incapable Zelensky is in positioning himself as a strong leader and protecting Ukraine in international platforms.

Zelensky won the elections by persuading people that he would be different from previous political leaders and treat the population as a priority. However, analysing his promises, one can see that the justice, police, and land reforms failed. Moreover, Zelensky increased his chances for victory by promising to bring a team of new leaders, which he evidently forgot.

The justice reform started during President Poroshenko’s term was one of the main conditions for the application to become an EU member state and receiving credits from the IMF. The point of the reform was to evaluate all judges based on their knowledge and performance to ensure the basis for a meritocratic system. Judges connected to the Yanukovych regime should be deprived of their authority if their actions in favor of the regime could be proven. In the end of the Poroshenko’s term, competitions took place; nevertheless, no significant changes have occured and judges who should be fired continue to be in their functions. Zelensky benefits from the state of affairs and uses anti-Maidan judges to adjust their authority to his needs.

The police reform proved itself to be ineffective when police officers started to abuse their power. Two most infamous cases to prove this include the rape of a woman and murder of a boy inside the police station. During the night of 23-24th of May, two policemen hit and raped a 26-year old woman inside the police station. The violation lasted for 8 hours; therefore, other police officers did not pay attention to her cries. As a result, 9 out of 19 police officers were fired, while two offenders are currently imprisoned and awaiting their sentence[5]. The second case involves a murder of a 5-year old boy. He was shot by police officers in June 2019; nevertheless, the case is still in court[6]. On the 5th of July, activists gathered under the building of the Cabinet of Ministers and demanded the Minister of Internal Affairs Arseni Avakov to resign[7]. The “Voice” group in the Parliament started collecting signatures for the resignation of Avakov while “European Solidarity” group in the Parliament claimed that the entire government has to be held responsible and were looking for support of other deputies. Avakov gave a briefing where he mentioned that police should do not what people want but what is right. However, since then, neither the government nor the President raised the question in media and, nor provided any adequate response to the situation.

The land reform is the one that Zelensky considers as his success. The topic was under discussion since Ukraine became independent; however, no previous President managed to lead the file to its fruitful end. In March, Members of Parliament voted for the creation of the land market. But MPs from the opposition emphasized flaws in the new legislation. The first problem is that it does not include mechanisms against land monopoly. The limitation of 100 hectares per person is valid until 2024, increasing to 10 thousand hectares after. Besides, legal persons are prohibited from buying land that opens a window for speculation, as investors will buy land for others while giving farmers no possibility to benefit from the reform[8]. That is why people criticize the legislation for being in favor of land monopoly while leaving farmers limited possibilities for land ownership.

Since the presidential elections in 2019, the number of cases against people who openly criticized Zelensky has increased progressively. One of the political promises of the President was to imprison Poroshenko and he is constantly trying to fulfill it. In June, 21 cases were opened against the ex-President and their number changes constantly[9]. In addition, the former Head of the Persecution Office, Ryaboshapka confirmed that he discussed cases against Poroshenko with Zelensky and lost his position when refusing to issue a formal accusation[10].

Nevertheless, Poroshenko is not the only person who managed to receive attention from Zelenskyi. The President considered himself a legal victim of several volunteers and ex-military. The first case that acquired vast attention from the public was against current MP Sofiya Fedyna and ex-military Marusiia Zvirobii[11]. Zelensky accuses them of planning a terrorist attack against him based on their Facebook stream. The case is still open; nevertheless, the interpretation of the video by the President and, consequently, by the court leaves many open questions, same as the presence of legal violations.

The public started talking about the violation of the Constitution by the court much earlier. It happened during the Sheremeta case that is still not closed. Three participants of UFO in the East, Yana Duhar, Yiliya Kuzmenko and Andriy Antonenko were imprisoned during the investigation of the case; however, Avakov did not advance any persuasive arguments that prove any relation of the convicts to the case. Besides, the difference between the results of expertises and conducted experiments has become a reason for public protests[12]. That is why civil society has extremely low trust of police forces and accuses Zelensky in the use of his authority to settle personal issues.

After one year, one of the toughest tasks for Zelensky is to preserve support of the population that is also constantly decreases. Even though one year is not enough to evaluate his actions, loss of the position of Ukraine in the international arena is evident. Besides, the President has to deal with failures of previous reforms that deepen public dissatisfaction. Clear and constant communication can aid Zelensky to improve the situation; however, the question is whether the President will understand his mistakes or increase the distance between him and the population over time.

Previous article Presidential elections in Belarus: time for changes? Next article Brain Drain and the unhappy generation of the Western Balkans

Khrystyna Khomyk has two master's degrees in political science from Friedrich Schiller University and the Kyiv-Mohyla Academy. She is particularly interested in relations between the EU and Eastern Partnership and Security and Defence policy. Now she is dealing with these two issues in the European Parliament.