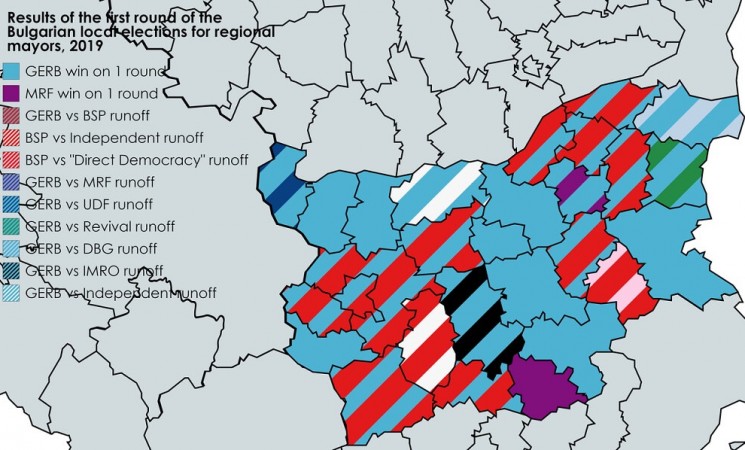 On 27 October 2019, the Bulgarian citizens had to choose who is going to be in charge of their local municipalities. The elections took place in 28 districts in the country, and as the Central Electoral Commission stated, out of nearly six and a half million people, approximately three million practiced their right to vote.

Only in nine districts, however, candidates won the majority of people’s votes. The political party GERB, which is also a ruling party in the country with Boyko Borissov being its leader and the Prime Minister of Bulgaria, has gained the trust of people in the five out of nine districts.

On the day of the second round of elections, the Central Electoral Commission reported that nearly two million voters supported their favorite candidates. According to Lora Indzova (2019), while some voters were highly active, for instance in Belene, others in bigger cities such as Plovdiv and Varna were not as much interested. On 4 November, the names of the winners, and the political parties they represent, were made clear. Candidates who represent the political party GERB became mayors of the cities of Sofia, Varna and Plovdiv.

However, the election-day and the second round of elections did not go so smoothly. The pressure between opposing political parties before and during the first and the second rounds of elections escalated. On numerous occasions, claims were made about violations of Electoral Law. In total, the Minister of Internal Affairs, Mladen Marinov said that for the first and second rounds of elections, a total number of 1644 reports were made about the violation of Electoral Law. Also, according to the Prosecutor General, Sotir Tsatsarov, 65 investigations have been launched, four persons were arrested, and ten were accused of committing electoral frauds. Among the detained is one candidate for mayor of the coastal city Nessebar. In a similar vein, bTV, a Bulgarian privately-owned national television, has launched an investigation showing a scheme for manipulating the voting process in the city of Lom.

European Commission for Democracy Through Law. (2014). Election Code of Bulgaria Adopted on 5 March 2014. Retrieved from:

Eleonora Dimitrova was born and raised in Bulgaria and currently lives in the Netherlands where she obtained her B.A. in European Studies and M.Sc. in Political Science. Eleonora Dimitrova has a strong interest in the history and current political affairs in Central and South-Eastern Europe. An example of a topic that she has recently explored concerning those regions was related to the integration of ethnic minorities in Bosnia and Herzegovina.