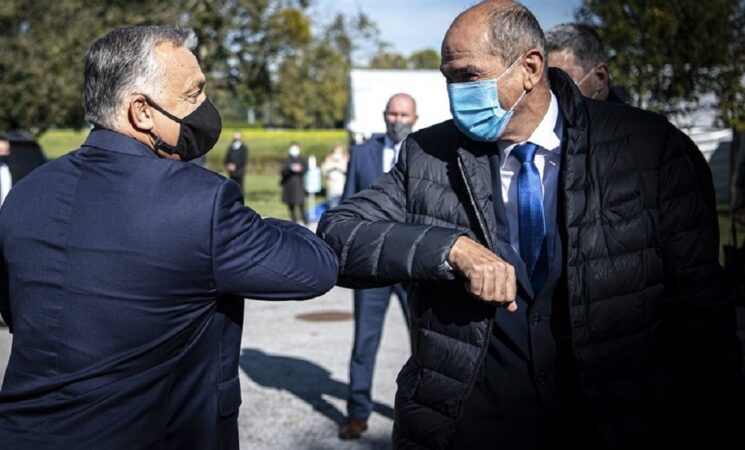 In May, Slovenia was the first European country to declare the end of its coronavirus pandemic. “Slovenia has the best epidemiologic picture in Europe,” proclaimed prime minister Janez Janša, declared the virus to be tamed and crammed the hotels, spas and the coast throughout all summer. Fast forward to today, Slovenia is at the top of the country rankings in terms of the number of new cases and deaths per million people – despite a very strict second lockdown that has been in place since the end of October. The problem in Slovenia, however, runs deeper than a mere public health crisis. Beyond the malady caused by the pandemic and the ensuing lockdowns, the current predicament is exposing serious cracks in Slovenia’s young democracy.

Political turmoil started in January 2020 when the center-left coalition under the prime minister Marjan Sarec resigned due to the political deadlock. His calls for elections were not heeded; parliament elected Janez Janša as a prime minister instead, granting him the third term as the head of the government - a rather surprising outcome, seeing that the same parties refused to form a coalition with Janša’s Slovenian Democratic Party (SDS) after it won the majority of votes in 2018 election. His comeback is even more startling when one recalls that his last term ended by a vote of no confidence due to the corruption scandals. But Janša is a skillful politician who has learned to navigate the murky waters and even use them to his own advantage.

A veteran of Slovenian politics, Janša is perceived either as a charismatic, efficient leader or as a man who sows divisions and promotes intolerance. He has politically reinvented himself many times – from a zealous communist in the old days of Yugoslavia, to his right-wing, anti-immigration populism of today. Most of his political capital stems from his role in the Slovenian independence, however, his image has been later tarnished by many scandals and controversies, most notably the Patria affair of 2008, which resulted in a conviction and prison sentence, later overturned by the constitutional court. Janša dismissed accusations and trial as a politically motivated witch-hunt by udbomafia, ‘uncles from behind the scenes’, and communists, i.e., Janša’s deep state. But from all imagined and real enemies of his, it is the media that Janša dislikes the most, especially journalists critical of his policies.

During his first premiership in 2007, almost 600 journalists signed the petition against political pressure and censorship. They accused the government of interference in the media after it replaced approximately 80 percent of the editors in the Slovene media landscape. In the following years, SDS has focused on building a media empire with support of the Hungarian capital and based on the tested propaganda model of Orbán. The two have become very close allies and Orbán has not only financed SDS’s media channels but has also supported its election campaign. This emboldened Janša who, upon assuming the office in March, almost immediately launched a campaign against critical journalists, accusing them of lying, being in the service of the opposition and endangering the public health. Smears, hateful speech, and harassment have become a normality in the lives of Slovenian journalists.

The International Press Institute (IPI) raised concerns about the situation in Slovenia, noting that only a few countries in Europe “have experienced such a swift downturn in press and media freedom after a new government came to power”. In its extended report, IPI reveals that verbal attacks on journalists started immediately after the change of government. The media must deal with an “extreme level of public bashing and smears” and increased online harassment enabled by the animosity of the officials. Janša has also renewed his attacks on the public broadcaster, Radiotelevizija Slovenija (RTVSLO), accusing it of spreading lies, inciting hatred and trying to overthrow his government. “An atmosphere of intolerance and hatred is being created by a small circle of female editors, having both family and capital connections with the pillars of the deep state,” he asserted in his article War with media that he published on the official government portal.

In July, the government announced amendments to media laws that would result in a budget reduction for RTVSLO and greater government control over the Slovenian Press Agency (STA). The Media Freedom Rapid Response expressed serious concerns over the amendments, noting they might be “a part of a wider politically-motivated attack on RTVS by members of the ruling SDS party”. The government already replaced three members of the RTVSLO’s Supervisory Board with people closer to the leading party. Moreover, it is now contemplating whether to cut STA’s funding for allegedly failing to provide information regarding its editorial content. The Slovenian Journalists’ Association condemned the act as yet “another attempt to destroy the national news agency” and a direct attack on the impartial, quality journalism in Slovenia.

As if not busy enough at home, Janša also decided to meddle in international affairs. He was the first (and the only) elected official in the world to congratulate Trump on the winning of elections despite all votes not being counted. Furthermore, he wrote a letter to the EU leaders backing Poland and Hungary on the rule of law issue. In it, he compared the EU to the sinking ship and complained about the 2014 Slovenian elections that were, so Janša, ‘stolen’, whilst the EU leadership remained silent. Needless to say, the letter was written and sent without any prior consultation with the government partners and had drawn strong condemnation from coalition and opposition alike.

In the meantime, the second wave of coronavirus swept across the country, causing a soaring number of new cases and enormous pressure on the health system. To deal with it, the government imposed one of the most stringent lockdowns in the EU, closing all businesses except for essential ones, putting a curfew in place that prohibits outside movement between 9 pm and 6 am, as well as enforcing restrictions on movement between the municipalities. Further measures aimed to alleviate the economy are inefficient, too complex and have created general confusion as well as aggravated the situation for many businesses, many of which will not see the end of the pandemic. Because of ensuing financial consequences, companies do not send their workers in the quarantine or isolation, and the employees do not report contact with infected people. Individuals with symptoms continue to work, as do the coworkers of those who tested positive. Small businesses wait for months to receive a promised government aid, all the while having to continue to pay their contributions to the state, despite not being allowed to provide their services and create profits.

Amidst all this, the support for the current administration is declining. Protesters have found innovative ways to express their dissatisfaction during the pandemic and have been organizing cycling protests on Fridays for weeks after the new government has been formed. As the new restrictions made it nearly impossible to demonstrate, they shifted from two wheels to four and have hit the Ljubljana streets in their cars – expressing their discontent with loud honking. Many have been awarded the fines by the police but have nevertheless announced further Friday protests, as they believe that the government "takes advantage of the epidemic for dictatorship, repression and violation of fundamental human rights".

Slovenia was once a beacon of Eastern Europe and a model transition country with dreams of becoming a ‘little Switzerland’. By taking a sharp U-turn towards the Hungarian illiberal model, it has profoundly changed its image and departed from its long-standing vision of becoming a full-fledged Western democracy based on European identity and values. This month it will mark the 30th anniversary of December plebiscite when the majority of Slovenians opted for independence from the Yugoslavian federation. That optimism and confidence seem but a distant memory today: ghost towns and empty streets bear little resemblance to a usually festive, ‘happy December’. Instead, people are cramped in their homes, losing loved ones, livelihood, and hope, growing tired of lockdown that brings little results and of government that seems most successful when embarrassing the nation on the international stage.

At the session of the National Assembly Luka Modrec, coordinator of the Left party, justifiably asked: “Mr. Janša, do you even want a prompt ending of this pandemic? Because it seems to me that the situation, as it is, suits you perfectly.”

Previous article Does Serbia still have room for independent journalism? Next article What is the European Defence Fund and what do the Visegrád States say to it?

Jasmina Eminić is an intern at Forum für Mittelost- und Südosteuropa. Her areas of interest include EU migration policy, EU integration, EU's relations with Western Balkans, the Middle East, and identity politics. Jasmina Eminić holds a BA in International Relations from University of Ljubljana, Slovenia, and is currently pursuing a second BA in History and Culture of Middle East at Free University Berlin. During her first studies, she spent one semester abroad at Berlin School of Economics and Law. She also completed internships in Slovenian government institutions as well as volunteered in the non-governmental sector, complimenting her knowledge with practical skills in event organization, public relations, project coordination and journalism. Jasmina Eminić speaks Slovenian, Bosnian, English and German, and is currently learning Arabic and Hebrew.