Saints Cyril and Methodius Day in the Czech Republic 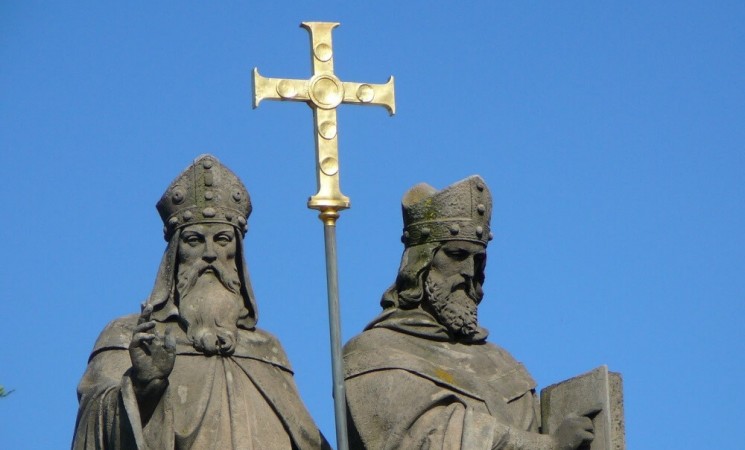 In 863, they came to the Great Moravian Empire which, among others, embraced the territories of the modern Czech Republic. There, Cyril and Methodius are known as creators of the liturgical Slavonic language and the Glagolitic alphabet, or hlaholice [transl. from Czech]. In the Great Moravian Empire, they translated the Bible and other religious books and helped to spread the Old Slavonic Language, or staroslověnština [transl. from Czech]. What is more important, the alphabet they created formed the basics of what was later used to establish more than 50 Slavic languages - the Cyrillic alphabet. In many countries like Ukraine, Russia, Belarus, and others, the Cyrillic alphabet remains the foundation for the writing.

Every 5th of July, Czech Roman Catholics gather at the place where Cyril and Methodius arrived in the Great Moravian Empire, Moravian town of Velehrad, to commemorate the two brothers and their great contribution to the proliferation of Christianity and development of the Slavic languages.

In the Czech Republic, for their contribution, the two brothers are considered as national saints or sometimes “apostles of the Slavs”, whereas in the Orthodox Church they are even titled as “equal-to-apostles”.

Even though many centuries passed since Cyril and Methodius came to the Slavic lands, people still remember and recognize the importance of this event. It is a celebration of not only a religious but also historical significance. With so many languages and countries the history of which ties back to the work of the two brothers, the holiday will remain important in the Czech Republic and other countries that share the history of the event.

Karina Kovalenko is a Ukrainian who studied Communication at LCC International University in Lithuania and Anglo-American University in Czech Republic. Passionate about international relations and politics, she is particularly interested in the European Union phenomenon and the messages the EU exchanges with non-member and candidate states. Her goal is to contribute to strengthening the relations between the EU and other countries based on spreading democratic values and sustainable development solutions.