Brain Drain and the unhappy generation of the Western Balkans 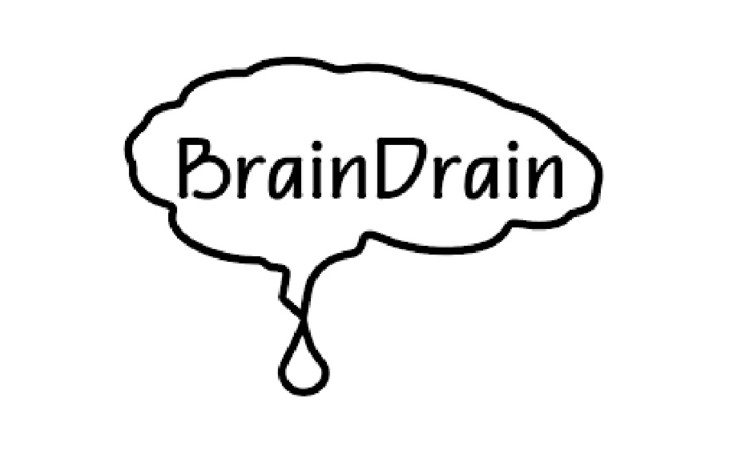 The emigration of highly qualified and highly skilled laborers motivated by the search for better opportunities, both within countries and across borders, definitely is a growing concern worldwide, as it has a major socio-economic impact, especially in developing countries. Commonly known as ‘brain drain’, this is a problem many European countries face.

Brain Drain is one of the most important migration issues in the Western Balkans.Even though the Western Balkans has traditionally experienced significant emigration movements, the latest trends in the region are undoubtedly worrying. In 2020, the World Economic Forum released the Global Competitiveness report, indicating that four Balkan countries are among countries with the biggest brain-drain in the world.

Young people are the most represented group among emigrants, paving even more challenges for the future development of these countries. Yet, public discourse within the region is currently limited to the voices of non-governmental organizations and other civil society groups, while governments remain silent.

What are the push factors?

Unemployment, low wages, corruption and lack of opportunities have been driving an increasing number of young people from the Balkans to Western Europe, the US and Gulf countries. Youth unemployment rates in the region are among the highest in the world. They vary from 28.1% in Albania, 39.7% in Bosnia & Herzegovina, in Montenegro 30.7 %, Serbia 30%, North Macedonia 39.1% and Kosovo 55.4% (2019). 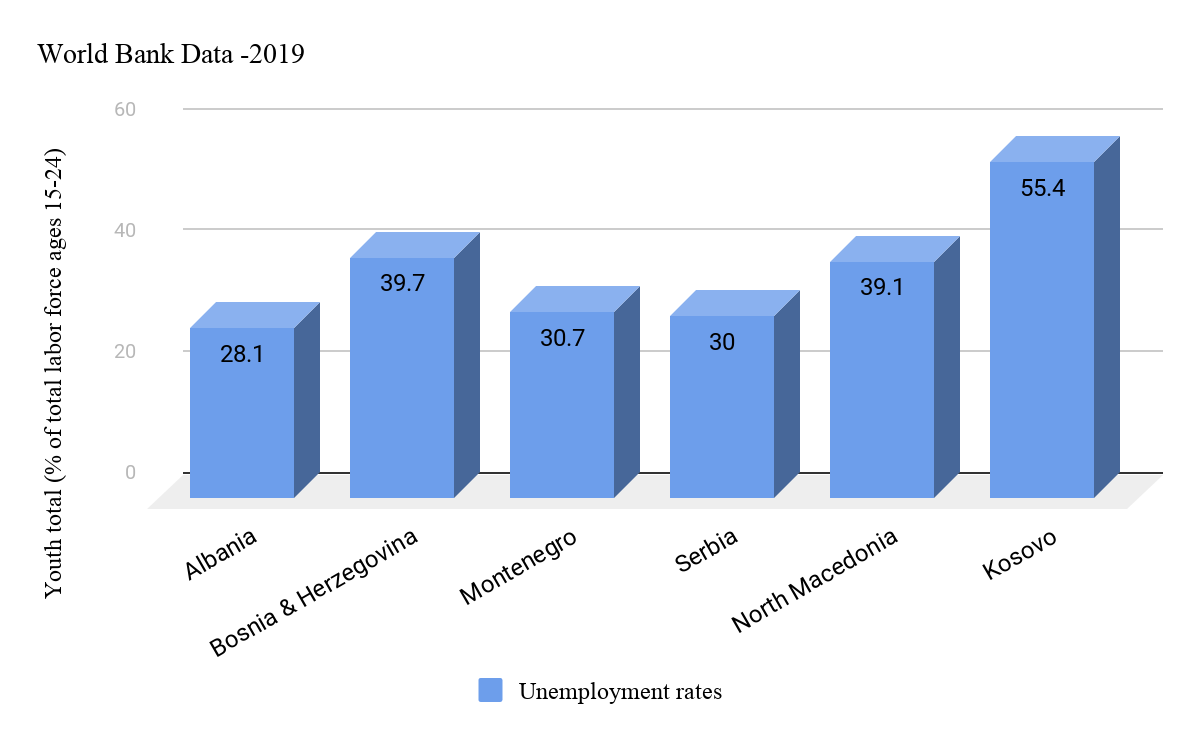 According to Balkan Barometer 2019 (Public Opinion Survey), the overall hierarchy of the region’s problems remains unchanged for the fourth year running:

Emigration seems to not be the cause, but merely the symptom of other underlying problems of the region’s governments. Structural weakness of democratic institutions and the rule of law (to mention just a few) have kept countries far off from exerting good governance. Dissatisfaction with the current state of affairs continues to grow across the region. The reasons and motivations for the human capital flight are often much more complex and diverse, than the list of the push and pull factors of emigration in the WB region.

It is not just unemployment and economic hardships that drive the youth to depart - political and cultural factors play an important role as well. Compared to the 2017 Public Opinion Survey, the region has seen a decline in satisfaction with social life, alongside happiness with education, safety, freedoms and public services. Young people see no perspective at home, despite several joint initiatives of the region's governments in this regard. Fostering ‘Regional Cooperation’ has been a priority action in creating opportunities for the youth in the region. The EU has been a crucial supporter, through a number of programmes and projects, as means to improve the future of WB youth, boost their mobility and promote overall social equity by providing opportunities for youth involvement. Here we can mention, the establishment of the Regional Cooperation Council, that provides economic opportunities for young people and seeks to create jobs at home for those who would otherwise seek work abroad. In the framework of the Berlin Process, was created RYCO-Regional Youth Cooperation Office a more locally owned initiative, that aims to “promote the spirit of reconciliation and cooperation between the youth in the region” by: promoting diversity and democratic values, the European spirit of cooperation, understanding and tolerance, active citizenship and participation in decision-making processes by young people and promoting the employability of young people in the region. Further crucial measures coming from the EU, include modernizing the educational system, promoting mobility and exchanges both within the region and with the EU (Erasmus+ Programme, establishment of WBAA), and encouraging youth entrepreneurial skills and active youth participation in civil society.

However, the lack of political will and monitoring, the shortage of adequate financing and the need to ensure effective implementation, have affected the timely response to the region's youth pressing issues. Even though the impact of these initiatives is difficult to measure as their objectives need time to materialize, something more needs to be done. Youth policies need to be a priority on the government's agenda. The inability to keep youth interested and active within a society results in the often-crippling brain drain phenomena. Raising awareness about the ‘brain drain’ and the need for timely solutions is crucial for the region’s future prosperity.

There is a certain ambiguity surrounding the youth emigration, as the lack of data and ongoing research constantly puts in question the ability of national states to intervene and mediate such losses. National Governments have fallen short to present any strategic decision nor a concrete plan to respond to it. Whilst some of the countries in the region recognize the high levels of outflow migration as an issue, there is no region-wide political debate on the matter. Knowledge of the extent and type of movement by (young) highly skilled workers makes it possible to formulate appropriate policy and/or measures aimed at mitigating, preventing and/or reacting to the loss of human capital at territorial level. Western Balkans Governments lack, on reliable statistics and data gaps at the sub national levels, this is especially evident when focusing on a particular age group (i.e young cohorts) with specific level of education or skills (i.e high), have limited their means to offer solutions.

The region has failed in understanding the complexity of the issue and its effect on human capital and growth. There is an urgency to apply direct specific policies to soften immigration and its effects on society. It’s crucial to start and think on long-term solutions, where national governments should address fundamental issues with policies aimed at improving governance, strengthening institutions and improving delivery of public services. But keeping in mind the urgency of the situation at hand, there are some specific policy options governments also need to think about when it comes to ‘brain drain’ and immigration.

It is fundamental to firstly become aware of the brain drain problem, as by identifying the talent they want/need to retain, attract or regain. Setting up appropriate tools and instruments that will fill the information gap and successfully plan the strategy to ease the return of those who left, is the very first step that was not yet made.

Building mechanisms to promote circular economy is very important, as it provides new opportunities for economic diversification, value-creation and skills development. Particularly capacity building in science, research and technology, which will be most economically beneficial in the short term and motivate people to stay. With regards to young talent, investing in order to favor knowledge creation and exploit specific sectors/skills is particularly important and may well be the best approach. Social policies for young people, better education and stronger cooperation with the diaspora are crucial in creating a better environment for youth.

The youth holds the key not only to the region's prosperous future but as well their chances of EU accession. Young people are the social and economic force of a country, representing its potential for the future. In a time of constantly developing technologies and rapidly changing political, social and economic realities they are among the most equipped to contribute to the solutions of the future. The Western Balkan countries should focus on giving young people reasons to stay- by providing better jobs, more opportunities and a higher standard of living.

With economic distress in the rise and social discontent, the region faces the risk of another lost generation.

Michael Landesmann and Isilda Mara, “Massive Migration and its Effect on Human Capital and Growth: The Case of Western Balkan and Central and Eastern European Countries”, Balkan Observatory, August 2016, available at

Youth challenges and opportunities in the Western Balkans

Previous article One Year of Zelensky’s Presidency: political promises and popularity Next article Conflict between Hungary and Ukraine: fault of the “education law”?

Marjola Memaj is a youth activist with demonstrated experience in the field of youth, regional cooperation and EU Integration topics. She has a rich experience coordinating various EU projects, working for different local and international NGOs. Ms. Marjola pursued her Master of Science (MSc) in Political Science and International Relations from NOVA University in Lisbon (Portugal). She has a university degree in Sociology from the University of Tirana. As a beneficiary of two Erasmus + programs: JoinEuSEE (Netherlands) and SIGMA (Portugal) since 2016, Marjola is the co-founder of the Western Balkan Regional Alumni Association (supported and founded by the European Commission) where she has held the position of National Representative and for 3 years has been part of the board. Her work experience also extends to the private sector, where she has been engaged as an External Relations and Partnership consultant. In addition to her academic and professional engagement, Marjola has been actively involved in events related to EU integration, promoting the Erasmus + program and Regional Youth Forums in the region.