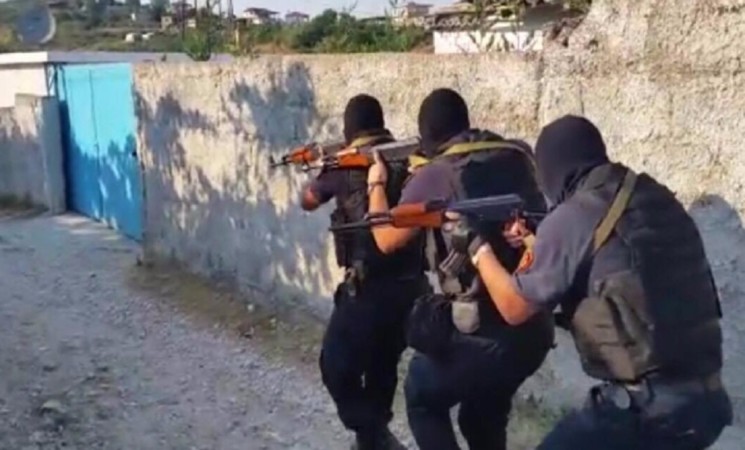 The end of the cold war era brought a wave of democratization of ex-communist countries in the east. The international arena was unilaterally dominated by the United States of America. This phenomenon would be described by Samuel Huntington as the third democratization wave. These countries had to undergo a difficult transition both political and economical, reforms that in a systemic level require a lot of energy and will from political elites and the people. Globalization, power vacuums, hybrid democracies and/or failed states made it easier for such asymmetrical actors to rise to the international scene.

Terrorism is the enemy of the 21-st century. This is what every government, intelligence agency or law enforcement institution is going to say about it. Terrorism comes in every shade of every color, whether it is religious based, ethnic based, or ideologically based terrorism. They all have the same means of achieving their goals, striking fear at civilian masses using violence and spreading it through the media.

Terrorism is an asymmetrical actor in the international arena, meaning that it is not an equal actor like countries or international organizations. Many attempts have been made to try and define and explain terrorism by many analysts and scholars of the field but no unified stance.

"Terrorism involves the use of violence by an organized group to achieve political objectives." (Collins, 2006, p. 365)

Unfortunately we have seen the way these groups operate, and their methods in New York, 11 September 2001, on the twin towers. The attack brought forth a new enemy and the war on terrorism.

To counter terrorism there are 3 approaches, according to Sederberg:

Some of the conditions favoring terrorism recognized from UN and OSCE include: "protracted and unresolved conflicts, the humanitarian deprivation of victims of terrorism in all its forms and manifestations, the lack of the rule of law, human rights violations, discrimination on the grounds of ethnicity, nationality and religion, political exclusion, social and economic marginalization and mismanagement." (The UN Global Counter Terrorism Strategy)

After the 90's the region of the Balkans plunged into war as a result of Yugoslavia's dissolve. The region is now facing a destabilization because of the war on one part and systematic political and economical on the other. This situation led to a power vacuum in these countries and made it possible for different terrorist groups to infiltrate, such as Al-Qaeda.

Political destabilization, weak law enforcement agencies, extreme poverty, were the perfect ground for these groups to try and recruit new "members" among them. Corruption among low and high officials of different institutions made the "cracks" of the system much more luring to these radical organizations. Thus, after the 2001 attacks in New York the U.S has heightened its focus on the Balkan region to not let it become a fertile ground for terrorist activity. Geographically it is a key region for it serves as a transit area between the East and West, a bridge between religions and also intertwining cultures for centuries.

Albania was not immune to these changes and was also not prepared for the new enemy that would present itself at her doorstep. Weak institutions, a small almost insignificant economy and religious communities that depended on foreign investments to build up were a high risk for national security.

Fortunately, these radical and sometimes extremist views of religion were not an endogenous problem rather than imported ones, by so called charitable foundations that came from the East, serving as a fake front for darker purposes from organizations such as Al-Qaeda.

Violent extremism is an existential danger for Albania based on the strong tradition of religious harmony. The main factors that have contributed to the threat of radicalization and violent extremism in Albania are: poverty, prolonged transition, lack of rule of law, unemployment, undermined democracy and the image of corrupt governance. The importation of various religious spectra after communism by dubious NGOs plays a large part in changing the perception of Albanian believers. The financing of religious communities with external assistance as the sole source of their restoration made them dependent on donors often unknown. Allowing the illegal construction of cult objects, the lack of a legal package on religious cults as a consequence of the communist past which denied and destroyed them.

"State failure is usually seen as a root cause of terrorism, and states are seen as safe havens for terrorist organizations." (Rotberg, 2002)

The participation of Albanian citizens in the Syrian war that began in 2012 where they went to support ISIS, and the hypothetical possibility of their return home translates into a threat to national security. That same year, we received calls for jihad through social media to refute Bashar al-Assad's regime. These calls found support from Salafist and Takfiri leaders in the Albanian territory who began recruiting, preparing and sending Muslim believers to the Syrian conflict. (Sigurise, 2017, p. 63)

Albania is a NATO member with aspirations to become a EU member, thus increasing the possibilities to become a target of malicious terrorist threats. Geographical proximity to the destabilized region of the Middle East, ease of travel as a result of globalization, social media made it easy for radical ideas to spread among vulnerable characters.

Neutralizing this phenomenon is based on community and coordination of security institutions and local community actors. This might be possible by cooperating with religious leaders, social workers and teachers, which have a strategic position in preventing radicalization.

"In the period 2012-2014, in addition to the involvement of the Albanian states in the Syrian conflict, there has been an increase in radical propaganda in some mosques outside the jurisdiction of the KMSH (Albanian Muslim Community) control that serve as a recruiting base and in the increasing use of electronic communications media by extremist groups." (Inteligjente)

"For the period 2014-2016 we have a total of 144 citizens from Albania involved in the armed conflict in Syria and Iraq, of which 79 men, 27 women and 38 children, 73 nationals are currently in Syria where 23 of the three are active in combat and 45 participating citizens have returned to Albania." (Inteligjente)

After the involvement of Albanian citizens in the Syrian conflict, a great number returned to Albania using different routes. The returnees were confronted by the police and also counter-terrorism forces in order for them not only to arrest these people that participated or not in direct fighting, but also putting them through de-radicalization processes.

The return of these foreign fighters from the Syrian conflict to Albania was affected by:

Albania is a strong member of the fight against terrorism and also the Global Coalition to Defeat ISIS led by the U.S. Albania has seen this threat as an existential one to its core values such as religious harmony, a tradition passed by generations through centuries. The Albanian people unity is based on ethnic grounds rather than religious ones.

The strategy adopted by Albania has been a combination of the three approaches Peter Sederberg acknowledges.

Militarily by fighting in the Global Coalition to Defeat ISIS. Legally by expanding its penal code towards hate speech and reinforcing border controls. Last but not least cooperating and keeping a high level of dialogue with religious communities to prevent radical interpretations of religion. (Zyrtare)

This strategy towards this threat is not only an issue of national or regional security, but it's now an issue of international security with the involvement of actors like the EU and NATO.

Some further recommendations to help in this battle would be:

-Measures against "dirty" money in order to cut funds for these groups.

-Increasing the role of media and educational institutions in the fight against violent extremism.

-The surveillance of people with extremist ideas who are serving their prison sentences in order to prevent a possible radicalization of others.